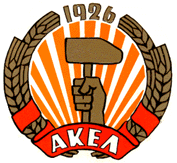 At the last legislative elections in Cyprus, May 27, 2001, the party won 34.7 % of the popular vote and 20 out of 56 seats. It was founded in 1926 with the name Communist Party of Cyprus (KKK). The communist party was supporting the independence of Cyprus and opposed Enosis (union with Greece) which was the main aim of the Greek Cypriot right wing. The party became illegal in 1931 when the British colonial government imposed restrictions in civil rights following anti-colonial protests. In 1941, leading members of the underground communist party and others founded AKEL. In the first municipal elections in 1943 (before that mayors were appointed) AKEL candidates became mayors of Limassol (Ploutis Servas) and Famagusta (Adam Adamantos). List of general secretaries:

AKEL, unlike its predecessor, was not against Enosis but supported a gradual process, starting off with a constitution and self government while Cyprus would remain a colony, leading to self determination and Enosis. After the failure of the consultative assembly in 1949 to grant a constitution acceptable to the Cypriot members, AKEL changed line, supporting immediate Enosis with no intermediate stages.

During the late fifties AKEL opposed the use of violence by EOKA. For this reason its members were considered traitors.

At about 1958, the Turkish Cypriot nationalist organization TMT started forcing Turkish Cypriot members of AKEL to leave. The Editor of a workers' newspaper Fazil Onder was killed and the head of the Turkish bureau of PEO (AKEL's trade union) Ahmet Sadi moved to the UK to save his life.

In the first presidential elections for independent Cyprus, AKEL backed Ioannis Clerides (father of Glafkos Clerides) against Makarios III. The last Turkish Cypriot to be a member of the central committee of AKEL, Derviş Ali Kavazoğlu was killed by TMT in 1965.

It is a member of the European United Left - Nordic Green Left in the European Parliament. Cyprus joined the EU in 2004.

It supports an independent, demilitarised and non-aligned Cyprus, and a federal solution of the internal aspect of the Cyprus problem. It places particular emphasis on rapprochement with the Turkish Cypriots.