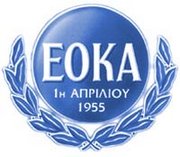 EOKA (Ethniki Organosis Kyprion Agoniston, in English National Organisation of Cypriot Fighters) was a Greek Cypriot military resistance organisation that fought for national self-determination and union (Enosis) with Greece in the mid- to late- 1950s. Since Cyprus was under British sovereignty at the time, its objective was to attract world public opinion and support to its cause through sabotage against British installations, armed attacks against British troops and popular passive resistance.

EOKA was, and remains, controversial. While it was popular with the majority of Greek Cypriots at the time and is today considered by many a heroic movement that liberated Cyprus from British rule, there were also some who did not support it. Cyprus's Communist party AKEL was the leading voice against EOKA. AKEL opposed EOKA's violent methods, preferring strikes and demonstrations. Many AKEL members were also opposed to EOKA's nationalist political aspirations. Turkish Cypriots, most of whom did not want to see Cyprus annexed by Greece, inflamed by propaganda broadcasts from Turkey, reacted violently to the EOKA campaign which precipitated the deterioration of intercommunal relations. Indeed, during the summer of 1958 the island verged on civil war. Memoirs of EOKA fighters indicate that at times the organisation did target Cypriots, both Greek and Turkish, who supported the British presence. The British colonial government appeared to exercise a policy of "divide and rule", drawing the majority of members of the island's police force from the Turkish Cypriot community. Whether this was a deliberate policy, or the consequence of widespread Greek Cypriot unwillingness to enrol in the force, remains open to debate. As a result, EOKA perceived its actions as attacking the British government, while the Turkish Cypriots often perceived them as an attack directly against the Turkish Cypriot community.

The organisation was headed by Georgios Grivas, a Cypriot-born Colonel in the Greek army. Its political wing was called PEKA while its youth movement was named ANE.

Grivas assumed the nom de guerre Digenis ("two-peoples") in honour of the legendary hero Digenis Acritas, who repelled invaders from the Byzantine Empire during the Middle Ages. EOKA was clandestinely supported by the Greek Government in the form of arms, money and propaganda on radio stations aired from Athens.

The EOKA campaign began on April 1 1955. Over 30,000 British troops were assigned to combat the organisation, which officially claimed the life of 104 British military personnel.

In his memoirs, Grivas writes of 8 phases of the struggle:

1. From its inception (1 April 1955) until the arrival of Sir John Harding (October 3, 1955). This phase was characterised by acts of sabotage, strikes, demonstrations and sporadic attacks against the British.

2.From the arrival of Harding until the exile of Makarios III (March 9, 1956). British soldiers are ambushed, the youth movement (ANE) is organised, the Battle of Spilia is fought.

3. From the exile of Makarios until the first ceasefire (August 16, 1956). The British enact a series of draconian measures and attempt to eliminate EOKA. EOKA counterattack and make an attempt on Harding's life. Mass demonstrations and general strikes continue.

4. Between the first and the second ceasefire (March 14 1957). EOKA continue to attack British military personnel whose presence is swelled by the invasion of the Suez. Turkish-Cypriots demand partition. EOKA fighters Markos Drakos, Michalis Georgalas and Grigoris Afxentiou are killed in battles.

5. From the second ceasefire until Harding's replacement as governor (November 6, 1957). EOKA limit their attacks in an effort to get Makarios III freed from exile. Makarios is freed. Turkish-Cypriots co-operate with the British against EOKA. Harding is called home.

6. From Foot's appointment until the announcement of the MacMillan plan (July 19, 1958). Sir Hugh Foot replaces Harding and seeks to meet Grivas. Turkish-Cypriot attacks against Greeks and their properties continue. EOKA react by resuming attacks on the British who fight back.

7. From the announcement of the MacMillan plan until the Cypriot matter being discussed in the UN (November 25, 1958). EOKA strike back against the Turkish-Cypriot extremists. The British "divide and conquer" policy seems to succeed. Four EOKA fighters are killed in the Battle of Liopetri. Kyriakos Matsis is killed at Dikomo. The first disagreements as to Cyprus' future surface between Grivas and Makarios.

8. From the discussion of the Cyprus question in the UN until the Zurich and London agreements (February 19, 1959). Violence subsides as Greece and Turkey discuss the future of Cyprus in Zurich. Greek Cypriots, Turkish Cypriots and the British add their blessings in London and the island of Cyprus becomes an independent republic.

EOKA's activity was officially suspended on March 9 1959 in response to the signing of the Zurich - London agreements, February 19 1959, which established an independent republic of Cyprus.

Actual independence was formally declared on August 16, 1960 However, the settlement specifically ruled out Enosis - the union with Greece sought by EOKA. This led to a feeling of dissatisfaction from a section of the Greek Cypriot population that shaped the events of the following years.