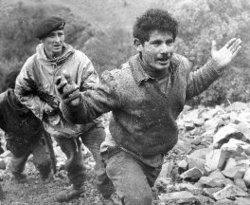 Efstathiou, a member of Afxentiou's group being arrested by the British on March 3, 1957.

Grigoris Pieris Afxentiou (Greek: Γρηγόρης Πιερής Αυξεντίου) was a fighter during the Cypriot struggle for union with Greece. He was second in command to Georgios Grivas in the leadership of EOKA (National Organization of Cypriot Struggle). His nom-de-guerre during the struggle was Zedhros.

Afxentiou was born, on February 22, 1928, in Lysi village in Mesaoria, Ammochostos province, (currently in Turkish-occupied Cyprus) and he studied in the Military school in Athens becoming a reserve officer in the Greek Army. In the Spring of 1955, he conducted attacks against the power company and the British-controlled Broadcasting Corporation in Lefkosia (Nicosia). The British authorities put a bounty of 5,000 pounds on his head. In December of that same year, Afxentiou was trapped in the mountains of Troodos, near the village of Spilia, along with Grivas and the hierarchy of EOKA. It was through his cunning that the EOKA fighter escaped during the Battle of Spilia while the British ended up fighting each other with heavy casualties.

Finally, on March 3, 1957, the British trapped him and his small team once again near the Machairas monastery. At the ensuing Battle of Machairas, Afxentiou held off the British, mostly single-handedly, for 10 hours before they burned him alive by pouring petrol in the cave in which he was hiding and igniting it.

Afxentiou's body was buried, without a funeral, in the yard of the Central Jail of Lefkosia.