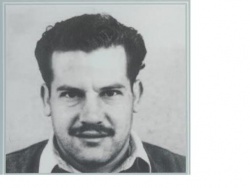 Kyriakos Matsis was a Cypriot fighter during the EOKA struggle of 1955 - 1959.

Matsis was born on January 23, 1926, in the village of Palaiochori, Lefkosia province, one of 3 children of Christofis Matsis. He studied in the University of Thessaloniki, received his degree in 1952 and returned to Cyprus. Matsis was active in labour union matters for both farmers and labourers. When EOKA was formed, he was one of the first to join.

On January 9, 1956, Matsis was arrested by the British. As he was an important EOKA member, he was questioned, among others, by Cyprus Governor Sir John Harding himself. At one point Harding offered Matsis £500,000, a new identity and relocation if he would reveal the whereabouts of EOKA leader Georgios Grivas-Digenis. Matsis replied: "Ου περί χρημάτων τον αγώνα ποιούμεθα, αλλά περί αρετής" ("This struggle is for virtue not for money").

While imprisoned, Matsis organised his fellow prisoners and, through his leadership, kept their morale high. He managed to escape from Kokkinotrimithia Prison, with six fellow inmates, on September 13, 1956 and rejoined the struggle as area-leader of Kyrenia. The British placed a £5,000 price on his head.

Finally, on November 19, 1958, Matsis and two companions - Kostaris Christodoulou and Andreas Sofiopoulos - were surrounded at their hideaway in Kato Dikomo, Kyrenia province. Matsis ordered his comrades to surrender but refused to do so himself. When the British commanded him to come out, he answered: "I'll come out shooting!". At this, the British firebombed the hideaway. When the smoke cleared, they removed the dismembered body of Kyriakos Matsis. He was buried in the Imprisoned Tombs in Nicosia.