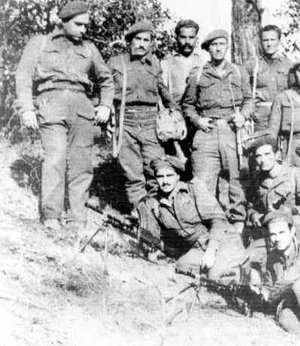 Markos Drakos (left) and his gang

Markos Drakos was a Cypriot guerilla fighter who was killed in the EOKA struggle (1955 - 1959) against the British.

He was born in Lefkosia, on September 24, 1932 and studied accounting. When EOKA was formed, Drakos was among the first to join, training others in the use of arms and recruiting members.

On April 1, 1955 - considered to be the first day of the struggle - Drakos and his "Astrape" ("Lightning") team blew up the radio station of Athalassa, destroying it completely.

On June 30, 1955, Drakos was arrested by the British but managed to escape on September 23 of that same year. A bounty of 5,000 pounds was placed on his head but that did not deter him from taking part in more battles and acts of sabotage.

Finally, on the night of January 18, 1957 the British forces attacked Drakos and his men at their hideout in Solea. Drakos fought in the rain and hail storm, almost single-handedly, allowing his comrades to escape. His body, with 40 bullet-holes, was recovered and interred by the British in the Central Jail of Lefkosia.