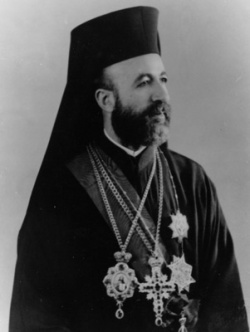 Makarios was the adopted clerical name of Michail Christodoulou Mouskos (August 13, 1913 – August 3, 1977). Makarios was Archbishop and Primate of the autocephalous Cypriot Orthodox Church (1950-77) and first President of the Republic of Cyprus (1960-77).

Mouskos was born in the village of Panayia in the Paphos province on August 13, 1913. In 1926, at the age of 13, he was admitted to Kykko Monastery as a novice, and was educated there and at Lefkosia and Athens, graduating in 1942 with a degree in Theology. He took up the duties of a priest in the Orthodox Church while sustaining an interest in academic theology and, in 1938, received a World Council of Churches scholarship to undertake further study at Boston University, Massachusetts, USA.

In 1948, while still studying at Boston, he was elected Bishop of Kition. Mouskos adopted the clerical name Makarios and returned to Cyprus.

Makarios was a charismatic and popular figure in Cyprus, but his relationship with the British authorities was fraught. Like many public figures in the Greek Cypriot community on Cyprus, in the 1940s and 1950s he was an active supporter of Enosis - the union of Cyprus with Greece.

On October 20, 1950, Makarios was elected Archbishop of Cyprus. In this role he was not only the official head of the Orthodox Church in Cyprus, but became the Ethnarch, de facto leader of the Greek Cypriot community. This highly influential position put Makarios at the centre of Cypriot politics.

During the 1950s, Makarios embraced his dual role as Archbishop and Ethnarch with enthusiasm and became a very popular figure among Greek Cypriots. He soon became a leading advocate for Enosis, and during the early part of the decade he maintained close links with the Greek government. In August 1954, partly at Makarios’ instigation, Greece began to raise the ‘Cyprus Question’ at the United Nations, arguing for the principle of self-determination to be applied to Cyprus. This was viewed by advocates of Enosis as likely to result in the voluntary union of Cyprus with Greece following a public plebiscite.

However, the British government were reluctant to decolonise the island. The 1950s were a troubled decade for the British Empire and the cause of Enosis was quickly and amorphously allied to the idea of independence. In 1955, a new organisation was formed under the banner of ‘Ethniki Organosis Kyprion Agoniston’ (in English ‘National Organisation of Cypriot Fighters’), under the leadership of Georgios Grivas, which conducted an armed struggle against the British occupation of Cyprus.

In October 1955, with the security situation deteriorating, the British Governor, Sir John Harding, opened talks on the island’s future. By this stage, Makarios had become closely identified with the struggle, and talks broke up without any agreement in early 1956. Makarios, characterised in the British press as a crooked Greek priest and viewed with suspicion by the British authorities, was seized at Lefkosia Airport and exiled to the Seychelles on March 9. EOKA continued its campaign of protests and armed resistance during this period.

In the latter years of the 1950s, the Turkish Cypriot community first began to float the idea of ‘Taksim’ or ‘Partition’, as a counterweight to the Greek ideal of ‘Enosis’ or ‘Union’. Advocates of Taksim felt that the Turkish Cypriot community would be persecuted in a Greek Cyprus, and that only by keeping part of the island under either British or Turkish sovereignty could the safety of the Turkish Cypriots be guaranteed. In this way the ‘Cyprus Question’ became increasingly polarised between two communities with opposing visions of the future of the island.

Makarios was released from exile after a year, although he was still forbidden to return to Cyprus. He went instead to Athens, where he was rapturously received. Basing himself in the Greek capital, he continued to work for Cypriot freedom. Negotiations in 1958 generated the Zurich Agreement as a basis for a deal on the independence of Cyprus - as the British would not hear of Enosis - and Makarios was invited to London in 1959 to fine-tune the plan. On March 1, 1959 the archbishop returned to Cyprus to an unprecedented reception in Lefkosia, where almost two-thirds of the adult Greek Cypriot population turned out to welcome him. Presidential elections were held on 13 December 1959 and Makarios roundly defeated his rival, lawyer John Clerides – father of future president and Makarios ally Glafkos Clerides – receiving two-thirds of the vote. Makarios was to become the political leader of all Cyprus as well as the communal leader of the Greek Cypriots.

After his election Makarios, together with the Vice-President-elect, Dr Fazil Kucuk, continued to draw up plans for Cyprus’ future. By now, Makarios – always a canny politician – had accepted that Enosis was not to be in the foreseeable future and that the only outcome which could secure harmony in Cyprus was robust independence. Taking office on 16 August 1960, the day the British flag was finally lowered in Lefkosia, Makarios now pursued a policy of non-alignment, cultivating good relations with Turkey as well as Greece and becoming a high-profile member of the Non-Aligned Movement. He attended the Belgrade NAM conference in 1961, and unnerved the governments in London and Washington with his lukewarm policy towards the West. This was seen in the US as unpredictability and a tendency towards Communism and Makarios was vilifed as a ‘Castro of the Mediterranean’, although he had by now been rehabilitated in the British press and was affectionately nicknamed ‘Black Mak’ on account of his clerical garb.

The idea of an independent path for Cyprus had not taken root among the general public and the political scene was still highly polarised. There was increasing acrimony between Turkish and Greek Cypriots about the workings of the constitution and Makarios was forced to act to salvage the machinery of state from imminent collapse. In November 1963, Makarios proposed Thirteen Amendments to the Constitution, which would free up many public offices from the ethnic restrictions agreed in London and Zurich. This, he argued, would allow the government to operate more efficiently and bring together the communities by dissolving rigid inter-ethnic legal boundaries. However, the Amendments were seen by many Turkish Cypriots as threatening constitutional protections for them against domination by the majority Greek Cypriots. In response to Makarios’ proposals, most Turkish Cypriots in public office, including Vice-President Kucuk, resigned, and large numbers of Turkish Cypriots moved out of ethnically-mixed areas into villages and towns where the population was already largely Turkish Cypriot. There is still dispute over the motives for this, some arguing that it was made necessary by the intimidation of the Turkish Cypriots by the Greek Cypriots, and others suggesting that the Turkish community was sabotaging the Cypriot settlement and already preparing for partition by Turkey. An armed struggle by the Turkish community was quickly answered by the Greek side and war was threatened between Greece and Turkey.

The political landscape in Cyprus remained interminable. UN peacekeeping operations (UNFICYP) commenced in 1964 and helped to soothe, but not to solve, the situation. Makarios continued his high-profile neutrality, but ultimately failed either to reassure the Turkish Cypriots that they were safe in an independent Cyprus, or to convince the Greek Cypriots that independence was a satisfactory alternative to assimilation within a Greater Greece. By 1967, when the military junta seized power in Athens, Makarios was viewed in Greece as a left-wing renegade who had failed to deliver on the promise of Enosis. Accordingly, the Greek colonels sponsored a right-wing coup in Lefkosia on 15 July 1974. Makarios fled and was replaced by Nikos Sampson, a newspaper editor and former freedom fighter during the EOKA era. Sampson’s presidential career was short-lived, however, as the regime in Athens collapsed only a few days later after Turkey invaded the island on 20 July 1974. Unsupported, Sampson resigned, and the former constitution was restored. In the continuing absence of a Vice-President, the presidency passed to the Speaker of the House of Representatives, Glafkos Clerides. The restoration of the old order did not prevent Turkey from staging a second operation, one month later, and seizing nearly 40% of Cyprus creating 200,000 refugees in the process.

Makarios remained in London for five months. Having succeeded in securing international recognition that his administration was the rightful government of the whole island, he returned to Cyprus and focussed solely on restoring Cypriot territorial integrity. He was not successful. Turkey has remained in occupation ever since and the situation is still unresolved.

Makarios III died unexpectedly on August 3, 1977 of a heart attack. He is buried in a tomb in the mountains near Kykko Monastery, where he served as a novice in the 1920s and 30s. An imposing bronze statue of Makarios was erected outside the Presidential Palace in Nicosia.

He remains a controversial figure, reviled by some as a traitor to the Enosist cause but admired by many as a national hero. In any case he is possibly the most significant figure in recent Cypriot politics, and his efforts to secure international consensus on the legitimacy of the Greek Cypriot government after 1974 have provided the backdrop against which the whole recent political history of the Cyprus Question has been played out.

Text of Makarios III's famous interview with Orianna Fallaci, given in 1974

A series of stories from the BBC relating to Makarios