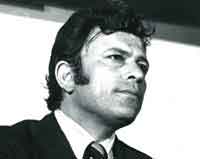 Nikos Sampson (December 16, 1935 – May 9 2001) was the coup d'état-installed "President" of Cyprus, after the overthrow of President Makarios in 1974. Sampson was a member of EOKA-B, which sought enosis (union) of Cyprus with the motherland Greece.

Sampson was born Nikos Georgiadis in the Cypriot port city of Ammochostos. He began his working life as a correspondent for The Cyprus Times, changing his surname to Sampson in order to distinguish him from others who bore his family name. He was soon drawn into the resistance campaign against British rule in Cyprus, waged from 1955 to 1959.

Joining EOKA, he became known to the British Army and police as one of its most feared and ruthless gunmen. He and his supporters were to become notorious for a number of killings they carried out along Ledra Street. Among these were the murders in 1956 of three police sergeants, for one of which Sampson was tried in May, 1957. He confessed, but was acquitted because his confession had been coerced through torture. A month after this acquittal, he was convicted of weapons possession, which carried a death sentence under the emergencey regulations of the time.

The death sentence was subsequently commuted to life imprisonment and Sampson was flown to Britain to serve it. He was released a year and a half later under a general amnesty as part of the 1959 London agreement but remained in exile in Greece until Cyprus gained formal independence in August 1960, with Archbishop Makarios as its first President. He returned to Nicosia shortly after Independence Day, receiving a hero's welcome.

Sampson returned to newspaper publishing, admitting in 1961 in a series of newspaper articles that he had in fact killed the police officers in 1956.

A fanatical believer in enosis with Greece, Sampson threw his weight behind a campaign to achieve it. He participated in clashes between the Greek and Turkish communities in December 1963 which eventually led to a UN peacekeeping force being dispatched to Cyprus. The effect of these clashes was withdrawal of the Turks from government and the move of Turkish Cypriot community into enclaves.

In 1970 Sampson became a member of the Cyprus Parliament. In 1971, EOKA head General Grivas returned to Cyprus and gave the campaign for enosis further momentum, forming EOKA-B. The Greek military junta of 1967-1974 gave active support to EOKA-B.

President Makarios had outlawed EOKA-B but by this time, the police, the National Guard and the Civil Service were heavily infiltrated by EOKA-B, and only the death of General Grivas in 1974 enabled President Makarios to attempt to purge EOKA-B from government and the military. But before he could do so, he was deposed by a military coup on July 15, 1974, which was led by Greek officers of the Cyprus National Guard.

After the Athens-backed coup, the Greek military junta installed Sampson as Cyprus' second president, but Sampson was forced to resign eight days later, after the Turkish used the coup as an excuse to invade Cyprus.

Sampson was sentenced to 20 years in prison for treason in 1976. He was subsequently allowed to go to France for medical treatment, before returning to Cyprus in June 1990. Following his release from prison only a few months later, he went back to the newspaper publishing business. He died in Nicosia on May 9, 2001.

The 1974 coup led not only to heavy loss of life in Cyprus, but also to the displacement of tens of thousands of Greek Cypriot civilians who were forced to flee their homes in the wake of the Turkish military invasion. Greek Cypriots condemned him for his far right-wing policies and the damage he did to inter-communal relations, as well as for (in their view) bringing catastrophe upon Cyprus in the form of the Turkish invasion and subsequent occupation of a third of the island.

Right up to his death in 2001, Sampson denied that he had been involved in the planning of the 1974 coup, saying that he had accepted the role of president (offered him by the Greek junta) in an effort to bring an end to the inter-communal conflict. His supporters say that he was unfairly singled out for punishment while many others who took part in the coup were allowed to remain free and stay politically active. The newspaper he founded in 1960, "Machi" ("The Battle"), is still one of the most popular dailies of Cyprus.