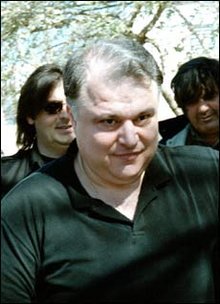 He was the owner of Olympiakos in the mid-80s 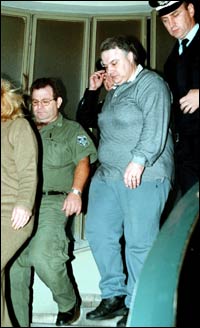 George Koskotas (Γιώργος Κοσκωτάς) was a former banker and publisher who spearheaded a financial scandal that brought down the PASOK government in 1989.

Koskotas was born in Greece on October 5, 1954. He migrated to the US with his parents in 1970. Koskotas grew up in the United States, returned to Greece in 1979 and joined the Bank of Crete as an accountant. He bought the Bank of Crete in 1984 and then built a banking and publishing empire that controlled three daily newspapers, a radio station and the soccer team Olympiakos of Piraeus. Later, he was incarcerated on an embezzlement conviction after a shortfall of 132 million dollars was discovered in the bank.

On October 8, 1988, Koskotas resigned as chairman of his media group, Grammi (Greek: Γραμμή Α.Ε.), saying he wanted to defend his "personal honor in a way that will not harm anyone at Grammi."

In the months that followed, Koskotas, who had by then fled to the United States, claimed that the late prime minister and PASOK party founder Andreas Papandreou ordered state companies to deposit funds with the bank, and took bribes from stolen money. The allegations resulted in the resignations of several ministers and demands for a vote of no confidence in the government. Mr. Papandreou, who died in 1996, was cleared of all charges by a special court in 1992 and was re-elected in 1993.

Koskotas was arrested on November 23, 1988, in Massachusetts, and was jailed in the United States until his extradition to Greece in 1991.

He was paroled and released from prison on March 16, 2001. He had served 12 years of a 25-year sentence for embezzlement, forgery and obstruction of justice felonies. Barred from leaving the country, Koskotas had also been ordered to report to an Athens police precinct twice a month.

In the mid-80s, Olympiakos FC came into the hands of Greek tycoon George Koskotas. Soon after Koskotas was accused of and convicted for embezzlement, Olympiakos was left deep in debt.