Born in 1897, in Athens, Greece, her real name was Georgia Athanassiou. She was obliged to leave school early and work as a shopgirl, in order to help her family. 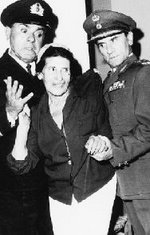 She made her stage debut in 1918, but began her studies at the Gennadeios Rhonetic School in 1923 and appeared in some operas. She then worked with the major theater companies of the period (Kyveli, Marika Kotopouli, Mitsos Myrat), playing a wide range of parts. In the mid-1930s she decided to retire, but Alekos Sakellarios offered her a small part in the 1939 musical comedy "Koritsia tis pantreias"; that was the genesis of a second career for the middle-aged actress, who went on to star in many comedies and revues and created personal stage groups until the late 1960s.

She also made a tentative movie debut in 1930, but became one of the all-time greats of the Greek cinema during the 1950s, when she starred in extremely popular comedies like "I Oraia ton Athinon", (1954), in which Nikos Tsiforos played with her rather plain looks, and "I Theia apo to Sikago", (1957) , in which director-writer Alekos Sakellarios cast her as a wealthy Greek-American who returns to Greece after thirty years and brings a fresh lifestyle to the family of her conservative brother.

She died οn February 12, 1980, but is always fondly remembered by Greek audiences.