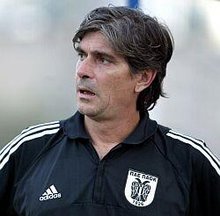 Giorgos Kostikos, born April 26, 1958 in Tashkent, Soviet Union, is a former PAOK football forward who is currently a coach.

Kostikos, originally with Pierikos Katerini, played for PAOK from 1978 until the 1986 season when he transferred to PAOK's hated rivals Olympiakos. He ended his career in 1988 at Diagoras Rhodes, after a total of 322 appearances at top level football. He was one of the players that participated in the 1985 PAOK team that took the National Championship (Alpha Ethniki). In 1987 Kostikos won the National Championship with Olympiakos. Kostikos was also a regular for National Football Team. At the end Kostikos was capped 35 times, scoring 3 goals.

After the dismissal of the former PAOK coach, Nikos Karageorgiou, Giorgos Kostikos took over the team as a temporary coach. After he led PAOK to qualify to UEFA CUP Groups, PAOK's president Yiannis Goumenos, rewarded him with yet another year at the helm.

Kostikos was replaced as coach of PAOK by former Romanian international Ilie Dumitrescu. In April, 2007, he signed a one-year contract to coach Nea Salamina Ammochostos in Cyprus.

Following his stint in Cyprus, Kostikos has coached Apollon Kalamaria and Veria FC.