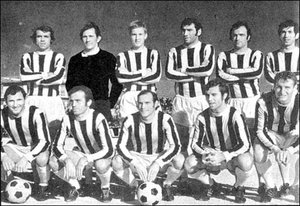 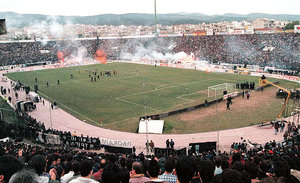 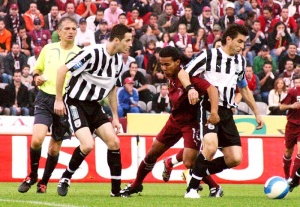 In 1957, the second stadium was started in the neighborhood of Constantinopolitan immigrants, called Toumba (Toumba, meaning tomb), which in recent years has become the home stadium. The new stadium was completed in 1959 and inaugurated with a 1-0 friendly victory over AEK Athens on September 6, 1959.

In 2021 PAOK was the first Greek club to qualify for the Group Stage of the new Europa Conference League of UEFA. On December 9, 2021 PAOK was qualified for the knock-out stage, as they ended second in their group. On February 24, 2022 PAOK managed for the first time - after five failures - to advance to the next round after the European winterbreak. At the same time PAOK managed to win a penalty shootout for the first time after four failures. The tie against FC Midtjylland of Denmark ended 2-2 on aggregate and 5-3 after penalties.

Players are asigned to the era where they made their first appearances.

Players in bold are currently active for PAOK

Dimitris Salpingidis is the player with most appearances for PAOK in European competitions: 60

Stefanos Athanasiadis is the player with the most goals for PAOK in European competitions: 20