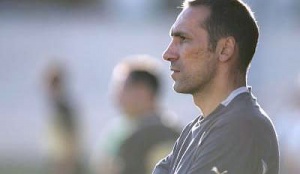 Giorgos Donis in 2004 as the coach of Larisa

Giorgos Donis (Greek: Γιώργος Δώνης), is a former footballer, the first ever Greek soccer player to play for the English Premiership.

Donis was born in Frankfurt, Germany, on October 29, 1969. He started playing football for local club Doxa Nikopolis before transfering to Pavlos Melas Thessaloniki in 1986. The following year he was acquired by Panathinaikos. To gain experience, over the next four years he was loaned out to Athinaikos, Panargeiakos and PAS Giannina.

Donis returned to Panathinaikos in 1992. Over the next four seasons he won 2 league titles and three Cups with the greens. A pacey right winger, Donis moved to Blackburn from Panathinaikos on June 5, 1996 after helping the Greek club reach the Champions League semi-finals in 1995-96. Rovers signed him on a free transfer, making use of the, then recent, Bosman rule. He signed for 1.1 billion drachmas, a record amount for Greek players at the time.

He had two not-so-successful seasons with Rovers before heading back home to play for AEK. Later he moved to England again, first for Sheffield United and then for Huddersfield Town where he ended his playing career.

Donis turned to coaching after his football career ended. He started with Ilisiakos moved on to Larisa and managed Akratitos FC for the 2005-06 season. In May 2008, Donis was named head coach of AEK. He resigned in November of the same year after a series of poor performances by the club.

From 2009 until 2012, Donis coached Atromitos Athens leading them twice to the final of the Greek Cup.

On June 28, 2012, Donis was in the news as armed robbers broke into his home in Kifissia and briefly held his children and in-laws hostage at gunpoint. In the ensuing gun battle with the police who were called on the scene, one policeman and one robber were wounded.

In October 2013 Donis was appointed as coach of APOEL FC. He stayed there till January 2015. Later he became coach of Al-Hilal (Saudi Arabia) and Al-Sharjah (United Arab Emirates) before returning to APOEL FC in July 2017. He was hired to achieve qualification for the Group Stage in the Champions League. Donis succeeded, earning APOEL FC a group with Real Madrid, Borussia Dortmund and Tottenham Hotspur. After a short stint at Panathinaikos that ended in being sacked he is now coach of Isreali side Maccabi Tel-Aviv.