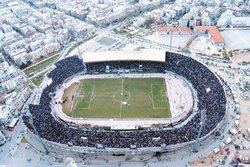 Location: Toumba is a district of the city of Thessaloniki (or Salonica) in Macedonia, northern Greece. The city has an international airport and is also easily accessible by train.

Toumba has hosted a few games of the Greek National Team. It has also been the venue for 3 Greek Football Cup finals.