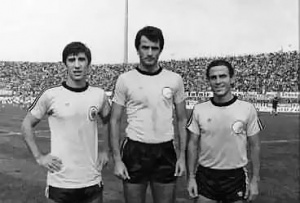 Thomas Mavros, Dusan Bajevic and Mimis Domazos with AEK in 1980 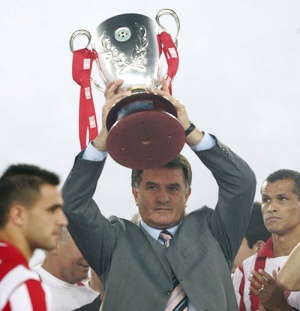 Lifting a trophy with Olympiakos 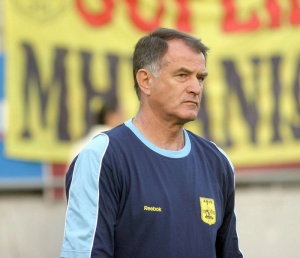 In his football career he was capped 52 times. He remains third all-time scorer in Yugoslavia, following Stradic and Pancev.

He is one of the most controversial figures in the history of the AEK team. He was a successful player, loved by AEK's fans. He joined the team in 1978 along with other great players of the era and won two championships and one cup title. He was also the league's top scorer during the season 1980-1981.

He took over AEK's managerial position in 1988. In his first year, he managed to lead the team to an unexpected championship title after ten years, since the rivals Olympiakos FC and Panathinaikos FC had teams that were considered superior. He also won three consecutive leagues (1992, 1993, 1994). On June 4, 1996, he moved to Olympiakos FC, bringing great fan hostility upon himself.

He returned to AEK in 2004 and the fans were divided among those who accepted him and those who hated him. The latter part of the fans made his life a living hell. They even threatened his life if he didn't leave. On a match day against Iraklis, he had had enough and with no prior warning left the bench and resigned while the game was in its first half. As AEK coach, in 2002-03 AEK became the first team to collect six ties, without victories and defeats in the Champions League and got third position. A notable match was the 2-2 tie against Real Madrid in Santiago Bernabéu Stadium.

In 2004, he returned to Olympiakos, where he won the double again. Also, his team was very close to passing to the second round of the Champions League collecting ten points, but however the defeat against Liverpool FC with 3-1 was the reason for not passing to the next round. Olympiakos went as far as the fourth round in UEFA Cup. Despite the good results, he was fired after the pressure of the fans because they were not satisfied with the team's way of playing.

May 25, 2006 Bajević became the coach of the former European Cup champion Red Star Belgrade. Hailed when he took over as a coach who could turn the 1991 European Cup winners into regular Champions League participants, Bajevic's eventual split with the club could hardly have been more acrimonious. On March 10, 2007 he walked out on his team 20 minutes before the end of a Saturday's 3-0 home drubbing by Vojvodina Novi Sad.

In September 2007, Bajevic returned to Greece to take the reins of Aris Thessaloniki. He led Aris to fourth spot in the Super League as well as the Greek Cup final. On July 1, 2008 he walked out on Aris, telling reporters he was quitting over board interference into which players he could use.

In November, Bajevic once more took over as coach of AEK. Daily Sportday reported that he signed a 2 1/2-year contract with an annual salary of around €500,000 ($630,000). He quit AEK in 2010 after a 3-1 loss to Olympiakos Volos. In October of the same year, Bajevic took up a new post as head coach of Omonia Lefkosia.

As of June 2012, Bajevic is the coach of Atromitos Athens.