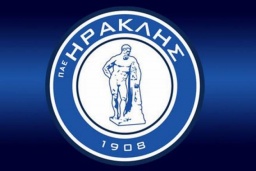 One of the oldest and richest clubs in Greek soccer history is Iraklis of Salonica. A "true" athletic organization that on top of its soccer department it has twenty other departments featuring men's and women's sports. The club was founded in 1899 as "Omilos Filomouson". In 1908 a "bitter part" of the initial club formed the Iraklis Macedonian Gymnastic Club. Later on it was renamed to "Othomanikos Ellinikos Gymnastikos Sillogos Thessalonikis o Iraklis" (Iraklis Ottoman Hellenic Gymnastic Club of Salonica). And then again later on it became "Gymnastikos Sillogos o Iraklis" (Iraklis Gymnastic Club).

The founders of "Gireos" (the old one), as it's known today, were Apostolos Kosmopoulos, G. Sotiriadis, and N. Manos. The first years of Iraklis were very hard since very few were those people that got involved with athletics in the area of Thessaloniki. During those years the club was kept alive by Kosmopoulos and G. Vaporis, two athletes that made sure that the name Iraklis was known throughout Greece.

The first soccer field was presented to Iraklis in the area of Skamnies. There every afternoon the young athletes of Thessaloniki would go and practice. Later on with the help of Eleftherios Venizelos and the Archibishop Gennadiou a field was donated near the University of Thessaloniki.

It was in that field that the first title of Thessaloniki was celebrated in 1926-1927 season. But still this stadium would not be "home" to Iraklis. In 1938 a decision by the government forced Iraklis to remain "homeless" for a period of time. Finally in 1948 Iraklis was able to get a field near today's Kaftantzoglio field. And once more Iraklis was still facing tough competition from the University of Thessaloniki.

The problem for a home field finally came to an end with the help of Asterios Papadopoulos (president in 1965). A field was purchased near the airport of Micra, where the official opening took place in 1971.

As for it's soccer contributions Iraklis showed a very strong soccer power after the war years especially the period between 1946-1947. That particular season the club came in second place after Olympiakos with just one point difference. That same year Iraklis went all the way to the Greek Cup finals but lost against the team of Olympiakos.

In 1976 in the Greek cup final between the two teams of Iraklis and Olympiakos the "old one" came out on top to win it after an outstanding game!

The 1980s saw Iraklis being relegated to the Beta Ethniki for the first time in history after accusations by local rivals PAOK that a member of the Iraklis board tried to bribe their players. Iraklis returned to First division the following year after a 26-6-6 season in the Beta Ethniki with a +77 goal differential!

In 1985 the team won the Balkans Cup with a 5-4 aggregate victory over FC Argeş Piteşti. Iraklis managed a 4-1 victory in Thessaloniki to overturn a 3-1 deficit in the first leg in Romania.

In 1987, Iraklis came close to a second Greek Football Cup victory but lost the penalty shoot-out in the final game against OFI of Crete (regulation time score: 1-1).

The years that followed saw Iraklis' top players retire. The team managed several top 6 finishes in the League but little else.

At the end of the 2011 season, Iraklis had finished 11th - well above the relegation zone. However, on May 12, 2011, the Hellenic Football Federation president, Sofoklis Pilavios, announced that Iraklis were guilty of submitting forged tax and insurance documents during the January transfer window. The club was automatically placed in the last position of the league standings and relegated to the B Division. Iraklis appealed the decision through the proper sports channels but were turned down.

The club then, on September 8, turned to the civil courts which is forbidden under Greek rules. The Hellenic Football Federation reacted by demoting Iraklis further to the C Division. On September 27, 2011, the Professional Sports Committee announced that Iraklis would have to compete in the amateur D Division as they had not submitted appropriate documents to compete in any of the professional leagues. A year later, Iraklis were admitted to the B Division.

Thus, Iraklis have been demoted twice from the Football A Division without having finished in a relegation spot in the League tables!

Return to the top division

On June 3, 2015 Iraklis Thessaloniki mathematically clinched the second spot in the second-division play-offs, behind AEK, to secure its promotion back to the Super League after four years in lower divisions.