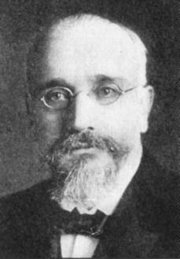 Eleftherios Venizelos (Ελευθέριος Βενιζέλος) (August 23, 1864 - March 18, 1936) was probably the most significant politician of modern Greece. Born in Mournies near Chania, Crete, he studied law at the University of Athens, then returned to Crete where he was elected to the local Assembly for the Liberal Party. He became prominent during the Cretan uprising against the Ottoman Empire in 1897 during which time he led an anti-Ottoman force in an effort to attain union with Greece.

The uprising ended with Crete being granted autonomy under the Ottoman Empire. British, Russian, Italian and Austro-Hungarian battle ships and marines came to Crete to force the Turkish army out of the island. Under pressure from the European powers, Prince George of Greece was made High Commissioner of the island with Venizelos serving as his councilor of justice. The European powers helped Prince George to create a Cretan Gendarmerie in order to enforce the law.

Prince George and Venizelos soon had a falling out because George, a staunch royalist, assumed absolute power. Venizelos became leader of the opposition, and when matters came to a head, led an armed insurgency, which eventually forced the prince to leave the island. He was replaced by former Greek prime minister Alexandros Zaimis.

In 1910, in Athens, the Parliament was dissolved in a political crisis. Venizelos moved to Athens and through the elections of August 8, 1910, he and his team were elected members of the Parliament. At that time was founded his party, called "Komma Fileleftheron" (Liberal Party). On October 2, 1910, he formed a government and started to reorganize the economical, political and national affairs of the country.

Because of his prudence in shaking-up the army and fleet, the country was well prepared for the Balkan Wars of 1912-1913, and thus it became possible to liberate the Northern territories of Epirus, Macedonia, and the Aegean Islands. The debates of Venizelos with Prince Constantine on the route of the Army and which cities should be first liberated are very well known. This was the first conflict between Venizelos and Constantine, who shortly became king after his father's assassination in 1913. The next conflict between Constantine and Venizelos was during WWI.

Though Greece remained neutral for the first years, Venizelos supported the an alliance with the Entente, believing that Britain and France would win. On the other hand Constantine wanted to remain neutral. In a series of debates, Venizelos resigned at February 21, 1915.

Venizelos' party again won the elections and formed a government. Though Venizelos promised to remain neutral, Bulgaria's attack on Serbia, with which Greece had an alliance treaty, obliged him to abandon that policy. He again disagreed with the king and resigned once more. At the next elections he didn't take part as he considered the dissolution of the Parliament unconstitutional. Meanwhile, with the excuse of saving Serbia, the Allies disembarked an army in Thessaloniki.

This debate between Venizelos and Constantine was the cause of the Great Division, which was a social wound for the country over many decades. In 1916 Venizelos' followers organized a military movement in Thessaloniki, called the "Provisional Government of National Defence". There they founded a new state including Northern Greece and Aegean Islands.

On May 1917, after the exile of Constantine (his second son Alexander succeeded him), Venizelos returned to Athens and allied with the Entente. After the war he took part in Paris Peace Conference, 1919 and signed as Greece's representative the Treaty of Neuilly (November 27, 1919) and the Treaty of Sevres (August 10, 1920). As the result of these treaties Greece acquired (very temporarily) Eastern Thrace and Smyrna). On his return to Greece he faced an assassination attack at the Lyon Rail Station. After his recovery he returned in Greece, where he was welcomed as a hero because he had liberated areas with Greek populations.

Despite the war victory, he lost the November 1920 elections, to the great dissatisfaction of the newly liberated populations in Asia Minor. As a result of his defeat, he left for Paris, withdrawing from politics. After the Asia Minor Disaster, he signed on July 24, 1923 the Treaty of Lausanne with Turkey as the representative of Greece. In the July 5, 1928 elections, his party regained power and forced the government to hold new elections on August 19 of the same year, in which Venizelos' party won 228 seats out of 250 in the Parliament. Venizelos governed Greece until 1932. On June 6, 1933 he faced his second assassination attempt.

This was followed by disorder that ended in the military movement led by him and General Nikolaos Plastiras on March 1, 1935. The movement failed, so he left for Paris, where he died in 1936. His body was moved and buried in Akrotiri in Crete.

The Eleftherios Venizelos International Airport in Spata, near Athens, Greece is named after him, and he is depicted on the Greek €0.50 coin.