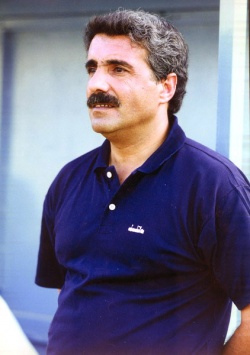 Pathiakakis was born on June 15, 1953 in Nea Ionia, Athens and played for:

As a player, Pathiakakis won the Greek Cup with Panionios in 1979 as he scored 3 goals against Olympiakos in the 2-game semifinals and 1 goal against AEK in the final.

Pathiakakis died on February 8, 2002, on the pitch of Akratitos, while training his team. After his death, the stadium where he left his last breath was renamed in his honour.