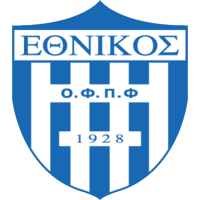 Known as the club of the upper classes of Piraeus (whereas Olympiakos has always been the team of the masses), Ethnikos was established in 1924 from a merger of local sides - Peiraikos Omilos FC and elements of Omilos Filathlon Piraeus - as Omilos Filathlon Piraeus - Faliro (Greek: Όμιλος Φιλάθλων Πειραιώς - Φαλήρου), meaning Fans' Club of Piraeus and Faliro, and then took the name Ethnikos O.F.P.F. in 1925.

Ethnikos Piraeus is a multi-sport club with teams competing in football, water polo, volleyball and basketball.

The club's most significant teams, in terms of history and success, are the football and water polo teams, though football is by far the more popular sport.

Ethnikos' traditional local rival is Olympiacos, one of the two most popular and successful multi-sport clubs in Greece (along with Panathinaikos), established a year after Ethnikos in 1925 in Piraeus.

While a legitimate rivalry between Ethnikos and Olympiacos still exists in water polo (Ethnikos' men's team has won the most Greek league championships of any club, while Olympiacos Water Polo Club has won the second-most), that is no longer the case in football. Ethnikos and Olympiacos F.C. were more or less evenly matched and had great battles for Piraeus supremacy in the 1920s and 1930s, but thereafter Olympiacos became increasingly more powerful and successful and began to pass Ethnikos by.

Along the way, Olympiacos developed a habit for luring Ethnikos' best players, like Greek national team players Philippos Kourantis in the late 1920s, Yiannis Chelmis in the late 1930s and Yiannis Ioannou in the early 1950s.

In 1956-57, Olympiacos was seemingly behind a scandal that robbed Ethnikos of the National Championship; Ethnikos was in 1st place by a margin of 4 points with just 4 matches left in the season, and had the derby with Olympiacos next on the schedule, but was then dubiously disqualified from the competition due to contact with Hungarian super-stars Ferenc Puskas and Sandor Kocsis. With Ethnikos out of the way Olympiacos ultimately took the Championship.

In 1973, Ethnikos lost the great Michalis Kritikopoulos to Olympiacos, just a year before Ethnikos mounted its greatest challange for the National Championship in the modern era; many Ethnikos feel that if they still had Kritikopoulos, the team would have managed to hold on to 1st place rather than run out of gas in the second half of the 1974-75 season.

In the 1990s, when Olympiacos was experiencing probably the greatest era of its history while Ethnikos was suffering through what was surely its worst, Ethnikos lost some of its fanbase to Olympiacos.

A recent point of contention for Ethnikos fans has to do with Karaiskakis Stadium. Karaiskakis is the traditional home of both Olympiacos and Ethnikos, but only Olympiacos has played there since the stadium was rebuilt for use in the 2004 Summer Olympics.

In 1932-33 Ethnikos won the Greek Cup, the club’s only major title. Ethnikos eliminated Apollon in the Quarterfinals and Olympiacos in the Semifinals before meeting Aris in the Final. Ethnikos and Aris played to a 2-2 draw in Thessaloniki, but Ethnikos won the replay 2-1 and took the Cup.

Ethnikos won another Piraeus Championship in 1938-39, but lost the South Division by 2 points, just missing out on a chance to play for the National Championship.

Ethnikos reached the Semifinals of the Greek Cup in 1938-39 and 1939-40, but lost to PAOK and Panathinaikos, respectively. 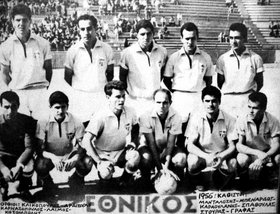 The Ethnikos teams of the mid- to late-1950s are considered by many to be Ethnikos’ greatest teams.

In 1956-57 a scandal robbed Ethnikos of the National Championship. With 4 matches left in the National Championship, Ethnikos was in 1st place by 4 points, and next on the schedule was Olympiacos, who Ethnikos had already defeated earlier in the season. Prior to the Olympiakos match though, Ethnikos was disqualified from the championshp, on the accusation of professionalism, as they had allegedly been in contact with Hungarian stars Ferenc Puskás and Sándor Kocsis, though it was never proven. Ethnikos was docked 4 points and not allowed to play the final 4 matches of the season, and Olympiakos took the championship.

From 1959-60 the Greek championship changed to its modern form and the first division became known as Alpha Ethniki (usually noted as A' Ethniki). Since 1959-60 Ethnikos is tied for the 8th-most first division participations with 36, along with OFI and Apollon. Ahead of Ethnikos are traditional powers Olympiakos, Panathinaikos, AEK and PAOK (all of whom have competed in the first division every season) as well as Iraklis , Aris and Panionios. (In 2006-07 the first division was renamed from A' Ethniki to Super League).

In 1974-75 Ethnikos made its best challenge for the league championship in the modern era. That season Ethnikos was winter champion, going undefeated through the first half of the season, but they could not keep up the pace and ultimately finished 4th (1 point behind PAOK for 3rd place and a UEFA Cup berth), while Olympiacos took the championship.

Though never making another legitimate challenge for the league championship, Ethnikos remained consistently competitive during the 1970s, never finishing outside of the top 10.

Ethnikos twice had the league’s top scorer during the 1970s: in the 1974-75 Roberto Calcadera’s total of 20 goals was tied for league-best with Panathinaikos’ Antonis Antoniadis and in 1976-77 Thanasis Intzoglou led the league with 22 goals.

In 1983-84 and 1985-86 Ethnikos reached the Quarterfinals of the Greek Cup but was then eliminated by Panathinaikos and Olympiacos, respectively.

In 1986-87 Ethnikos made a very mediocre 10th place finish, but late in the season earned one of their more memorable results - winning 6-3 away to Panathinaikos.

The [1987-88 team was the last truly competitive Ethnikos team to date. That year Ethnikos tried to make a run at a UEFA Cup berth, but ultimately fell short and finished 7th. The 7th place finish though was good enough to take some satisfaction from finishing ahead of Olympiacos, who finished 8th.

In the 1988-89 season Ethnikos made a good run in the Cup, reaching the Semifinals before being eliminated by Panathinaikos, but in the league the team finished in the bottom 3 and was relegated to Beta Ethniki for the first time in their history.

After being relegated from Alpha Ethniki for the first time in 1989, Ethnikos bounced between A' and B' Ethniki throughout the 1990s. Since a last place finish in [1998-99 though, Ethnikos has not managed to return to A' Ethniki.

The Ethnikos teams of the 1990s included several young players who would leave the club and become star players elsewhere, such as Michalis Kapsis, Yiannis Anastasiou and Andreas Niniadis.

After the 1999-00 season Ethnikos fell from Beta Ethniki to Gamma Ethniki for the first time. The club’s ultimate low point came when it fell from Gamma Ethniki and spent the 2003-04 season in Delta Ethniki.

In summer 2004 Ethnikos merged with A.O. Mani, a club from the Mani peninsula in southern Greece; the club maintained Ethnikos' logo and colors and continued to be based in Piraeus, but in name became Ethnikos Piraeus - A.O. Mani. Ethnikos fans were very upset with the name change, but that problem was eventually solved, as the club was officially renamed Ethnikos Piraeus in 2007.

In 2005-06 Ethnikos earned promotion back to Beta Ethniki in the final minute of the final match of the season. With time expiring, a free kick goal from Eduardo Sander Da Silva against Messiniakos made the final score 1-1 and gave Ethnikos the point needed for promotion.

Ethnikos currently plays its home matches at the Helliniko Olympic Complex in Ellinikon, located approximately 8 kilometres south of the center of Athens, just west of Glyfada, near the Mediterranean coast.

In August 2007 Ethnikos President Nikos Pirounias finalized a deal with the City of Ellinikon for use of the complex for 3 years with an option for a further 3 years. The Olympic Baseball Centre's main stadium underwent renovations for football use, and Ethnikos began playing matches there during the 2007-08 season; the team's first official match in its new home was a 1-1 draw against Ionikos on October 20, 2007. The facility became known as Elliniko Stadium, and is commonly referred to as Elliniko.

Ahead of the 2008-09 season renovations continued and seating capacity was increased to 9,000.

Karaiskakis Stadium in the Faliro area of Piraeus, commonly referred to as Karaiskaki, is the traditional home of both Olympiacos and Ethnikos, but only Olympiacos has played there since the stadium was leveled and rebuilt ahead of the 2004 Summer Olympics.

In 2002 Olympiacos President Socratis Kokkalis, in announcing the project to rebuild Karaiskakis, said, "It is our wish that [the new stadium] will also be used by Ethnikos F.C., as Karaiskaki is the historic home of both [Olympiacos and Ethnikos]."

Despite that statement, all of the new stadium's seats were painted Olympiacos' red, rather than a neutral color.

When the new Karaiskakis was completed in 2004, Ethnikos was struggling in Gamma Ethniki, and did not move into the stadium; the team instead continued to play most of its home matches in Korydallos Stadium, a small stadium in the Korydallos area of Piraeus, which is the traditional home of Proodeftiki F.C..

In 2005-06 Ethnikos moved to Georgios Kamaras Stadium in Rizoupoli (where Olympiacos played its home matches during the Karaiskakis renovations), and played there up until the move to Elliniko in 2007.

Karaiskakis Stadium is owned by the Hellenic Olympic Committee.

(Note: National Championship not played in 1928-29 and 1934-35, seasons when Ethnikos won regional championships)

Most appearances (A' Ethniki)

Most goals (A' Ethniki)

Most appearances by a foreign player (A' Ethniki)

Most goals by a foreign player (A' Ethniki)