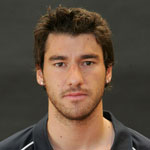 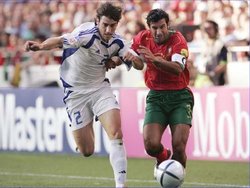 In a Euro 2004 game against Portugal 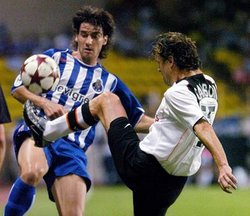 Giorgos Seitaridis (born June 4, 1981 in Athens), also known as Giourkas Seitaridis (Giourkas is his grandfather's name, which he uses in both Greece National Football Team and his club's shirts), is a member of the national football team of his country, Greece.

Coming from a family of Greek football stars, it is no wonder that Giourkas Seitaridis has made his own mark on the game. But his achievements in the UEFA EURO 2004 winning side surpassed those of father Dimitris, a star striker for Panathinaikos FC, uncle Miltos and grandfather Giourkas.

Seitaridis usually plays as a right-back but can move into the position of a right midfielder, if so required by the team formation implemented. He played his first game for Greece on February 13, 2002 against Sweden, and later that year participated in the 2002 UEFA European Under-21 Championship final round in Switzerland.

Seitaridis is one of the few youngsters in the Greek squad. More importantly, he was one of the few youngsters who shone at the 2004 European Championship. Seitaridis started his professional career with PAS Giannina FC, but had only played a handful of matches before being snapped up by Panathinaikos in January 2001. Seitaridis first hit the headlines as a 19-year-old Panathinaikos FC player when he scored a stunning goal against Manchester United in a UEFA Champions League tie in March 2001. After progressing through the Greek under-21 ranks to play his first senior game against Sweden Feb. 13, 2002, he came of age in Euro 2004 with a series of inspirational performances that earned him a place in the All-Star team.

Following his EURO 2004 success, he joined Portuguese champions and UEFA Champions League holders FC Porto. But after just one season in Portugal, Seitaridis was on the move again, signing a 10m euro five-year deal with Dynamo Moscow to become the richest player in Greek history on May 23 2005. After one season at Dynamo, Seitaridis signed for Atletico Madrid in the Spanish Primera Liga. He returned to Greece and Panathinaikos two seasons later.

On 10 September 2009, the last day of the Greek transfer period for free agent players, Seitaridis signed a 4 year deal with Panathinaikos, returning to the team after five years. It soon became apparent that Giourkas was unfit and was struggling to re-establish himself due to frequent injuries, missing most of the 2009–10 season's matches. However, on 21 March 2010, he surprisingly returned to the line-up for the big derby against rivals Olympiacos, and despite their defeat, Panathinaikos managed to end the season positively by winning the double. Seitaridis himself didn't appear at the 2009–10 Greek Cup final against Aris Thessaloniki due to injury.

The 2010–11 season started well for Seitaridis, being a starter at Panathinaikos' opening league fixture against Skoda Xanthi on 27 August 2010 and giving a good performance. However, another muscle injury meant that Seitaridis would return at a league game against Panserraikos two months later, on 4 December. Due to the player's poor condition he was placed on the transfer list in January 2011, but despite various offers from foreign teams during the summer transfer period, he stayed at Panathinaikos.

The 2011–12 season season was even more disappointing for him, as he was only used for 45 minutes in an away game against Atromitos, where he was substituted at half-time due to poor performance.