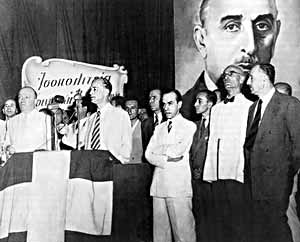 Members of the Hellenikos Synagermos (Greek Rally). From left to right, Stefanos Stefanopoulos, Panagiotis Kanellopoulos and Spiros Markezinis, underneath the poster of leader Alexandros Papagos.

In May 1951, Alexandros Papagos resigned from the Army, as to become involved in politics. He founded the Greek Rally (Ελληνικός Συναγερμός), modelled after De Gaulle's Rassemblement du Peuple Français and won the September elections with 35% of the vote, largely due to his popularity, his image as a strong and determined leader, and extensive American support. Despite this victory, Papagos was unable to form a government, and had to wait until the November 1952 elections, when, with a change in the electoral system, he gained 240 out of 300 seats in Parliament.