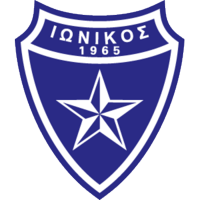 Ionikos are a Greek football club. They were founded in 1965 when AE Nikaia merged with Aris Nikaia.

They competed in the UEFA Cup in 1999, losing home and away matches to French outfit Nantes
Colours: Blue
Stadium: Neapolis (capacity 7,026)

Ionikos reached the final of the Greek Cup in 2000 losing to AEK in the final 0-3.