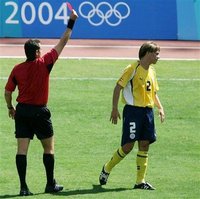 Vassaras was born on February 1, 1966. He became a FIFA International Referee in 1998 and the first international game he officiated was Austria vs San Marino (28 April 1999).

He officiated the 2002 World Cup First Round match China vs Costa Rica 0-2, the Final of the 1999 FIFA Under 17 World Championship held in New Zealand and the Olympic Games Athens 2004 Final: Argentina v. Paraguay.

In his spare time, Vassaras likes to paint and practice Watersports.