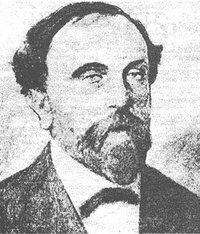 Lorentzos Mavilis (given name Laurentius), poet, was born in Ithaca on September 6, 1860 to Corfiot parents. With the aid of his teacher, Ioannis Romanos, he met with the intellectual men of his country, especially with Iakovos Polylas, Gerasimos Markoras, etc., and so he was initiated into the poetry of Dionysios Solomos. A multilingual man, he studied the poetic masterpieces of the European literature, of which he translated many. He lived for several years in Germany, where, as a student, he was influenced by Kant and Schopenhauer. He participated in the patriot struggle in Crete, as well as in the Greek-Turkish war of 1912 for the liberation of Ioannina, as captain of the Garibaldini. He was killed in action, November 29, 1912 on Mt. Driskos, near Ioannina.

Lorentzos Mavilis' poetry was the result of the meeting of modern artistic movements, his socialist ideas and the poetry tratidion of his native Ionian Islands. Mavilis had almost exclusively cultivated the sonnet form. "Elia" and the "Lithi" are considered the most characteristic.

He also translated works by Schiller, Byron, Shelley and Tennyson and from Sanskrit.