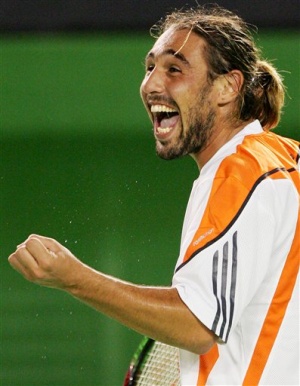 Marcos Baghdatis (Μάρκος Παγδατής in Greek) (born June 17, 1985, Limassol, Cyprus) is a Cypriot professional tennis player. His best result to date was reaching the final of the 2006 Australian Open where he lost to the #1 seed Roger Federer.

Baghdatis is of Maronite (father) and Greek Cypriot (mother) origin. His father, Christos, migrated to Cyprus from Lebanon, where he met his wife, Andry. His parents own a clothing store in Paramytha, a small village near Limassol. He has a younger sister, Zena, who was adopted when she was one month old, and two elder brothers, Marinos and Petros, who also played Davis Cup for their country. Baghdatis began playing tennis at age five with his father and brothers. He enjoys playing and watching football, and is a supporter of Apollon Limassol FC in Cyprus. He trained at the Mouratoglou Tennis Academy in Paris on an Olympic Solidarity Youth Development Programme Scholarship since age 13. Currently he is dating Camille Nevieve, a French model, who is the stepdaughter of his French coach Guillaume Payre.

Baghdatis became the ITF World Junior Tennis Champion in 2003 and joined the ATP professional tour later in that year.

Baghdatis performed moderately throughout most of 2004. He picked up his form later in that year. He was one of the two players who took a set off their encounters with eventual champion Roger Federer in the 2004 US Open (the other player was Andre Agassi). Baghdatis then went on an impressive run to finish the year with two challenger tournament titles, in which he defeated many higher ranked opponents.

Baghdatis's 2005 season began on a low as he crashed out of the Chennai Open in the first round. But he redeemed himself in spectacular fashion in his next tournament, which was the year's first Grand Slam, the Australian Open. He ousted then-top-20 player Ivan Ljubicic in the second round and then had a straight sets victory over another top-20 player Tommy Robredo in the third round before running into Roger Federer in the fourth round, where he lost. His 2005 performance at the Australian Open set him apart as one of the young talents to watch out for in the coming months.

Unfortunately, Baghdatis suffered an injury right after the 2005 Australian Open and was out of the professional tour until late April, when he entered the clay court tournament Estoril Open in Portugal. He held two match points in his first round match against a resurging Juan Carlos Ferrero, but failed to convert them into a win.

Baghdatis kept playing challengers and qualifying for upper-tier ATP events for the rest of 2005 and found good form towards the end of the year. As a qualifier, he made his way through to the finals of the ATP tournament at Basel, defeating former world number two Tommy Haas, world number forty Jose Acasuso, and the would-be 2005 Masters Cup champion David Nalbandian in that run. But he failed to go past the final hurdle and went down to Chilean Fernando Gonzalez in four sets (7-6, 3-6, 5-7, 4-6). Although he was not the first qualifier to reach an ATP tour event final, he was the first player from Cyprus to do so.

Baghdatis started 2006 in an ever-improving fashion. He entered the 2006 Australian Open as an unseeded player and produced an unexpected four-set (6-4, 1-6, 6-3, 6-4) victory over second-seed and world number three Andy Roddick of the United States in the fourth round, outplaying the big-serving American with accurate returns and powerful, well-placed groundstrokes. He then went on to beat the seventh-seed Croat Ivan Ljubičić in five sets (6-4, 6-2, 4-6, 3-6, 6-3) in the quarter-final and in the semi-final, he came back from two sets down to defeat the fourth-seed Argentine David Nalbandian, again in five sets (3-6, 5-7, 6-3, 6-4, 6-4). The unprecedented vocal support he enjoyed from his local fans (comprising mostly of members of Melbourne's large Greek community) throughout the tournament was considered one of the highlights of the 2006 version of the Grand Slam event.

On January 28, Baghdatis received an exemption from Cypriot national service from the government so that he can concentrate more on tennis. Otherwise, he would have had to serve 26 months of military service, normally mandatory for Cypriot males over 18.

At Wimbledon, Baghdatis defeated Scottish player Andy Murray in the fourth round in straight sets. In the quarterfinals, Baghdatis beat Lleyton Hewitt in four sets. Baghdatis then lost to Rafael Nadal 6-1, 7-5, 6-3.

At the U.S. Open, Baghdatis defeated Alexander Waske of Germany in the first round 7-6, 7-6, 6-3. He played retiring U.S. player Andre Agassi in the second round, and in a long match that lasted past midnight, Baghdatis lost 6-4, 6-4, 3-6, 5-7, 7-5. Although Agassi seemed to be cruising early in the fourth set, Baghdatis rallied from down 4-0 to take the set. He overcame cramping in the fifth set, trying to push the set into a tiebreaker, but Agassi broke his serve in the last game.

At the China Open, an ATP International Series event, Baghdatis defeated Mario Ancic in the final for his first career ATP tournament championship.

At the International Series Open 13 tournament in Marseille, France, Baghdatis advanced to his second consecutive singles final and the fifth of his career, where he lost to Frenchman Gilles Simon 6-4, 7-6(3).

Baghdatis's playing style is relaxed and smooth, with no apparent technical weakness in any particular area of his game. His main strength is a powerful forehand, and a natural talent for placement. He can make accurate and powerful down-the-line forehands and cross-court forehands on the run, and often patiently constructs points to get in a position from where he can make outright winners with those shots.

He also has an exuberant and festive on-court presence that frequently rubs off on to the spectators. According to the Guardian, "Baghdatis is a wonderfully ebullient character who radiates immense enjoyment whenever and wherever he plays, and ... has acquired a loyal throng of fans who roar his every winning point."