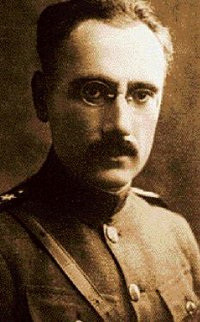 He was born on January 1, 1893, the son of Jacob Frizis, in Chalkida, Euboea. Frizis attended Military School and was commissioned a Second Lieutenant. He served in the Greek Army's Ukraine campaign in 1919, in the wake of the Bolshevik Revolution, where his knowledge of Hebrew helped him with the locals. After the Allies' withdrew from the USSR, Frizis went on to serve in the Greco-Turkish War (1919 - 1922). There, he was promoted to Lieutenant but was taken prisoner by the Turks. When offered his freedom as a non-Christian, Frizis refused, preferring to share the fate of his fellow POW officers.

After he was freed, Frizis went to study in France at the Ecole Militaire Supérieure. He returned to Greece and achieved one promotion after the other until he reached the rank of Colonel.

When World War II broke out, Colonel Frizis saw action at Kalamas and Premeti. He was the first senior Greek officer killed in action, on December 5, 1940, at Kalpaki, after an Italian aerial attack of his unit's position. Frizis had refused to take cover, preferring instead to make sure all his men were protected.

A statue was erected in his native Chalkida to honour him.