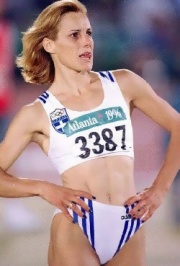 Niki Bakogianni is a former Greek athlete who competed in the high jump.

Bakogianni was born on June 9, 1968, in Lamia, Central Greece. Her moment of fame came on August 3, 1996, when she won the silver medal in the Atlanta Olympic Games, behind Bulgarian Stevka Konstadinova, with a new Greek record of 2.03m. She won silver later in that same year in the European Games in Stockholm.

Bakogianni has served as President of the Association of Greek Olympic Champions. She quit athletics in 2004 after failing to achieve the limit for participating in the Olympic Games in Athens.

Bakogianni is the mother of two boys. She is listed in the Guiness Book of World Records as the woman athlete with the greatest difference between her high jump performance (2.03m) and her height (1.70m).