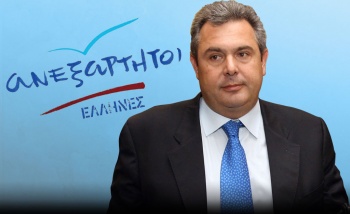 Panagiotis "Panos" Kammenos is a Greek politician and leader of the Independent Greeks political party.

Kammenos was born in Athens on May 12, 1965. He studied Economics at the University of Lyon, France with graduate studies in Business Management in Switzerland.

He was first elected to the Hellenic Parliament in 1993, under the banner of New Democracy in the B' district of Athens, and has been re-elected ever since.

Kammenos pulled his Independent Greeks party out of the coalition with Syriza on January 13, 2019, after a dispute over the name of Former Yugoslav Republic of "Macedonia".