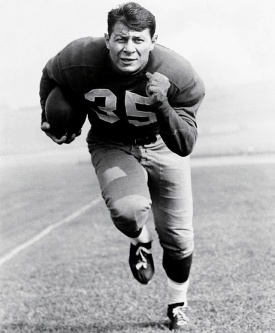 Pete Pihos was know as the 'Golden Greek'

Peter Louis Pihos (born in Orlando Florida on October 22, 1923. He died August 16, 2011) was a retired professional American football player in the National Football League for the Philadelphia Eagles. He was a high school junior when his mother moved the family to Chicago. His father was a murder victim, and when a suspect was acquitted, Pete decided to become a lawyer. He was just one semester short of a law degree when he became disenchanted with the idea.

Known as the "Golden Greek, " Pete earned a battlefield commission with the US Army in World War II.

Pihos was an All-American at Indiana University, as a defensive end.

Pihos was drafted in the third-round of the 1945 NFL Draft by the Eagles, but two years of military service prevented him from joining the team until 1947. During his nine seasons of play, he missed just one game.

Immediately after Pete joined the Eagles, the team marched to its first divisional championship. In the playoff game against the Pittsburgh Steelers for the Eastern Division crown, he blocked a punt to set up the first touchdown in the Eagles 21-0 win. Philadelphia won three straight divisional championships and then back-to-back NFL titles by shutout scores. In 1948, the Eagles defeated the Chicago Cardinals 7-0. One year later, Pihos caught a 31-yard touchdown pass in the Eagles 14-0 win over the Los Angeles Rams.

Pete led the NFL in receiving from 1953 through 1955 and earned first-team All-Pro or All-League honors six times and was named to six Pro Bowls.

He was enshrined in the Pro Football Hall of Fame on August 8, 1970.

Perhaps Pihos's biggest moment was catching the game-winning pass in the 1949 title game, but he ended his career in stellar fashion, too. In his home finale, Pihos broke his single-game record with 10 catches against the Chicago Cardinals. The next game, his last ever, Pihos caught 11 passes.