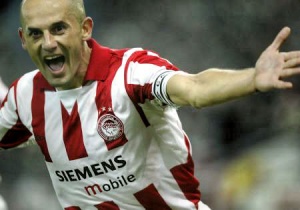 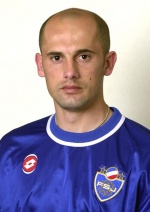 Predrag Djordjevic (born August 4 1972 in Kragujevac, Yugoslavia) is a former Serbian footbal player who played as a left-side midfielder for Olympiakos and Serbia and Montenegro.

Djordjevic – nicknamed "Djole" – was the captain of Olympiakos and played many times with the national team of Yugoslavia and later Serbia and Montenegro. He was very much appreciated by Olympiakos fans and was considered to be one of the best non-Greek players ever played for the club.

Having started his career with spells at FK Crvena Zvezda and then FK Spartak Subotica, Djordjevic first moved to Greece to play for third division Paniliakos in 1993. He was an instrumental figure as the Pyrgos club achieved successive promotions.

He came to Olympiakos from Paniliakos with Stelios Giannakopoulos in 1996. They were the basis of the team that won the seven consecutive titles. Dusan Bajevic signed him for Olympiakos in the summer of 1996. The Serbian established himself as the club's dead-ball specialist, penalty taker and leader. He scored 50 goals in his first five seasons at Olympiakos, all of which brought titles. Another superlative season in red and white followed in 2002/03, Djordjevic scoring 14 league goals and providing 15 assists. He also hit form in the UEFA Champions League, scoring four goals in six games which included a hat-trick against Bayer 04 Leverkusen. In 2003/04, Djordjevic recorded ten goals and 22 assists. He was voted the best foreign player in the Greek Alpha Ethniki even though his club were pipped to the title by Panathinaikos.

Djordjevic made his international debut for the then Yugoslavia against Switzerland in September 1998. He featured in qualifying for UEFA EURO 2000, but did not make the squad for the finals. He also appeared on the Euro 2004 qualifiers and remains a key part of their World Cup 2006 side. He has 21 caps and one goal with Yugoslavia and after the breakup of that country 16 caps (no goals) with Serbia and Montenegro.

In 2004/05 he missed his club's first three Champions League matches through injury, but returned to score the winning goal against Deportivo La Coruña. He captained his side in all four UEFA Cup matches, scoring against Newcastle United.

In 2006, he led his side to the domestic double, appearing in 25 league matches, scoring five goals and providing six assists. He signed a two-year contract extension and played through the 2009 season.

On June 1, 2009, Djordjevic announced his retirement from football.

He is married to a Greek woman and has Greek citizenship.