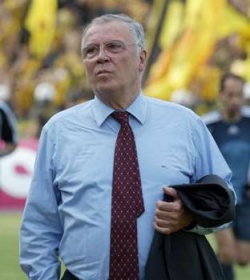 A recent picture of Savvas Theodoridis

Despite the brevity of his career, many consider him to be the all-time best goalkeeper in Olympiakos' history while others consider him the best keeper Greece has ever produced.

He was capped 12 times by the Greek National team (12 games in succession).

Theodoridis served Olympiakos in an executive capacity up until his death on August 17, 2020.