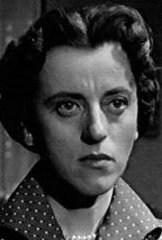 She studied music and the piano in Athens, and decoration and painting in Paris, France.

From 1954 through 1967 she worked on radio as a producer and performer. She also studied set design and costume alongside Yannis Tsarouchis and acting at the Drama School of the Art Theatre with Karolos Koun.

From 1955 to 1969 she worked in newspapers and magazines as an editor for art content. She also did literary and other forms of translations.

She made her name in film by playing the parts of harsh and unforgiving older women that gave the romantic leads a hard time - she was the bad mother-in-law, the unfeeling mother or disapproving sister that tried to prevent things from following their natural course.

Apart from films, Tasso Kavvadia had also worked in theatre and television, where her repertoire was considerably more diverse, while she also did work in radio and as a journalist, a writer and a translator, especially of pop culture british novels.

Tasso Kavvadia will always be remebered as the legendary female villain of the hey-days of Greek cinema. As she used to say "I was strict, not mean, but I was right for the times. I was not wrong in not liking Jenny Karezi who had an affair with Kourkoulos - who was engaged to my daughter, or Manos Katrakis whom Zoe Laskari was cheating on and wasting his money."

She was survived by her three children (Evgenia Salapata-Winminhem , Vassilis Salapatas, Giorgos Salapatas from he first marriage.