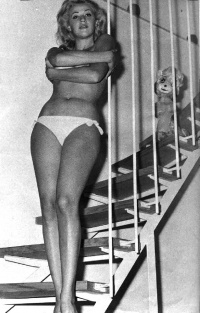 Zoe Laskari was one of the most famous film and theatre actresses of Greece. She played in many important films of the Greek cinema including "Girls for kissing", "Some like it cold", "Law 4000", "Stephania", "A girl for two", "Marijuana stop", etc. Her theatrical hits included Oi Erastes tou Oneirou (Dream Lovers) opposite Tolis Voskopoulos.

Laskari was born Zoe Kouroukli, on December 14, 1943, in Thessaloniki and was first cousin to Zoe Kouroukli the singer. In 1959, at 15 years of age - below the minimum age - she won the Miss Greece pageant. No stranger to controversy, Laskari has played in many risque roles and has posed for Playboy Greece, being on the first cover of the first ever edition.

Laskari was married to distinguished lawyer Alexandros Lykourezos from 1976 until her death. The couple had a daughter. Earlier, she was married to Petros Koutoumanos.