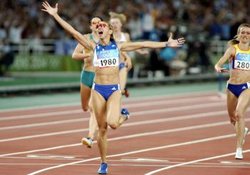 Athletics was the original sport at the first Olympics back in 776 BC where the only event held was the stadium-length foot race or "stade". The earliest recorded win was at these games in the stade race.

There were several other "Games" held throughout Europe in later eras:

Many athletic events have an ancient origin and were already conducted in competitive form by the ancient Greeks. Athletics was included in the first modern Olympic Games in 1896 and has been part of the program ever since, providing the backbone of the Olympics. Women were not allowed to participate in track and field events in the Olympics until 1928.

An international governing body, the IAAF was founded in 1912. The IAAF established separate outdoor World Championships in 1983. The AAU (Amateur Athletic Union) was the governing body in the United States until it collapsed under pressure from advancing professionalism in the late 1970s. A new governing body called The Athletics Congress (TAC) was formed, it was later renamed USA Track and Field (USATF or USA T&F). An additional, less structured organization, the Road Runners Club of America (RRCA) also exists in the USA to promote road racing. Both organizations allow athletes to receive money for racing putting an end to the "shamateurism" that existed before.

In the field events, indoor meetings only feature the high jump, pole vault, long jump, triple jump and shot put. The longer throws of javelin, hammer and discus are reserved for outdoor meetings, as there is normally not enough space in an indoor stadium to house these events.

There are other variations besides the ones listed below but races of unusual length (e.g. 300 m) are run much less often. With the exception of the mile run, races based on imperial distances are rarely run on the track anymore since most tracks have been converted from a quarter mile (402.3 m) to 400 meters.

Men and women do not compete against each other. Women generally run the same distances as men although hurdles and steeplechase barriers are lower and the weights of the shot, discus, javelin and hammer are less.