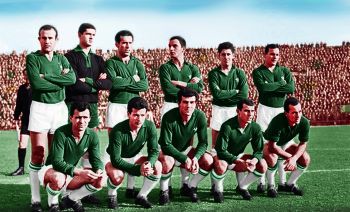 The 1963-1964 Football Championship was a Panhellenic championship organised under the auspices of the Hellenic Football Federation. It was won by Panathinaikos.

PAOK and Aigaleo had −1 point deducted each

The 1964 season was won in convincing fashion by Panathinaikos who became the first and, so far, only Greek side to win an Alpha Ethniki title undefeated. Panathinaikos coach, Stjepan Bobek, imposed the 4-3-3 system on the greens at a time when all other teams in Greece were still playing the 3-2-5.

The 1964 season also saw another peculiarity as Kostas Nestoridis not only failed to win his 6th consecutive top scorer title but was not even near the top. This was due to AEK coach Heinrich Mueller assigning him a new role - that of withdrawn centre forward and playmaker.