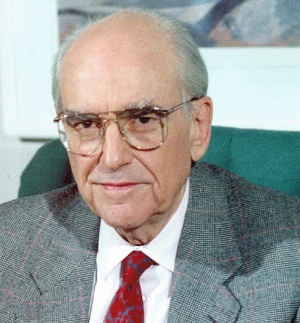 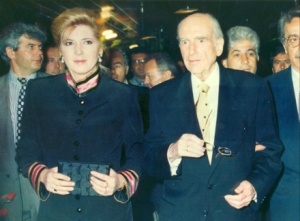 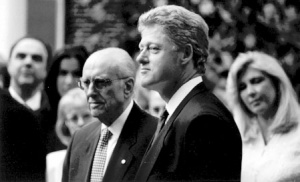 Papandreou was born in Chios, Greece, the son of the leading Greek Liberal politician Georgios Papandreou. His mother, born Sofia Minejko, was Polish. He attended the University of Athens from 1937, and from 1938 he was active in Trotskyist groups. The dictatorship of Ioannis Metaxas was established in 1936, and in 1939 Papandreou was arrested, imprisoned, and tortured. It is, however, alleged in subsequent Trotskyist accounts that he and some other arrested students gained release by collaborating with the police. He was then able to use his family connections to leave the country.

Papandreou returned to Greece in 1959, where he headed an economic development research program. In 1960 he was appointed Chairman of the Board of Directors and General Director of the Athens Economic Research Center and Advisor to the Bank of Greece. In 1963 his father George Papandreou, head of the Centre Union party, became Prime Minister of Greece. Andreas became his chief economic advisor. He renounced his American citizenship and was elected to the Greek Parliament in 1964. He immediately became Minister to the First Ministry of State (in effect, assistant Prime Minister). Papandreou took at least rhetorically a neutral stand on the Cold War and wished for Greece to be more independent from the USA. He also criticised the massive presence of the American military and intelligence teams and wished to remove senior officers with anti-democratic tendencies from the military. He also tried unsuccessfully to prevent the continuation of the KYP's practise - which worked extremely closely with the CIA - to listen to ministerial conversations with Covert listening devices.

His rapid rise provoked resentment and was a factor that led to the fall of Georgios Papandreou's government: in 1965 Georgios Papandreou wanted to fire the defense minister and sought to take the post himself while the "Aspida" conspiracy within the Army, said to involve Andreas, was being investigated.

When the Greek Colonels led by George Papadopoulos seized power in April 1967, Andreas and George Papandreou were both imprisoned. George died under house arrest in 1968, and Andreas was again expelled from the country. In exile, he formed a new anti-dictatorial organization, the Panhellenic Liberation Movement (PAK), and toured the world rallying opposition to the Greek military regime. Despite his long residence in the United States, he held the Central Intelligence Agency responsible for the 1967 coup and became increasingly anti-American.

Papandreou returned to Greece after the fall of the junta in 1974. There he established a new radical party, the Panhellenic Socialist Movement, or PASOK. Most of his former PAK companions, as well as members of other anti-dictatorial groups such as the Democratic Defense joined in the new party.

In office Papandreou had to backtrack from much of his inflammatory campaign rhetoric. Greece did not withdraw from NATO, United States troops were not ordered out of Greece, belligerent language about Turkey and Cyprus was dropped, and Greek membership of the European Economic Community continued. In domestic politics Papandreou's government carried through sweeping liberal refoms of social policy, but there was little specifically socialist about its actions in office.

Papandreou was easily re-elected in 1985, but in 1989 the elections produced a deadlock, which led to a prolonged political crisis. Eventually the New Democracy leader, Constantine Mitsotakis, succeeded in forming a government. From this time on Papandreou's career became increasingly surrounded by controversy and scandal. In 1989 he divorced his wife Margaret Papandreou and married a third time to an Olympic Airways hostess, Demetra Liani. This led to estrangement from his adult children, one of whom, Giorgos Papandreou, was by this time a senior PASOK minister.

In the same year, Papandreou was indicted by Parliament in connection with the US$200 million Bank of Crete embezzlement scandal. He was accused of helping the embezzlement by ordering state corporations to transfer their holdings to the Bank of Crete, where the interest was allegedly skimmed off to benefit PASOK. He was cleared of all wrongdoing in January 1992.

Papandreou confounded his critics by winning elections in October 1993, mainly by exploiting Greek nationalist sentiment over the Macedonia issue. But Papandreou's fragile health kept him from exercising firm political leadership. His wife became increasingly influential and it was alleged that she was preventing him from retiring. Papandreou was hospitalised with advanced heart disease and kidney failure in November 1995, and finally retired from office on January 16 1996. He died in June. His funeral procession produced the greatest outpouring of public emotion ever seen in modern Greece.

Andreas Papandreou was an intensely polarising figure. He was a powerful orator and was adored by the working class and many people in rural Greece who warmed to his populist attacks on the rich and his romantic Greek nationalism. Political conservatives detested him, believing him to be a corrupt demagogue who ruined Greece's reputation and economy, and antagonised her neighbours. His successor in office, Costas Simitis, abandoned many of his policies, but was seen by many as a dull technocrat in comparison.

Papandreou's son, Giorgos Papandreou, was elected leader of PASOK in February 2004. At the 2004 Greek elections, PASOK exploited the Papandreou legacy with the slogan "Andrea, zeis! Esy mas odhigeis!" ("Andreas, you still live! You lead us!"). Despite this PASOK was defeated by the ND leader Costas Karamanlis.