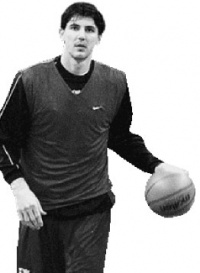 Efthimios Rentzias retired from basketball at the age of 30.

Efthimios Rentzias, born January 11, 1976 and raised in Danaos Trikala, was a 2.13-meter Greek basketball center player. He retired from basketball in August of 2006, at the age of 30. The talent and aspiration of Rentzias, one of the world’s leading players during his peak, led him to several clubs, mostly abroad, including the NBA's 76ers, where he spent a short stint.

Working his way up the junior ranks, Rentzias won a silver medal with Greece at the European Championships in 1991. Four years later, he won a world title at Under-19 level and was voted the tournament’s MVP.

At senior level, Rentzias was a member of the Greek squad that ended fifth at the Atlanta Olympics. Rentzias last played with Greece at Eurobasket in 2003 and was then dropped from the squad for the Athens Olympics after coach Panayiotis Yiannakis decided to inject younger blood into its ranks. Over all, Rentzias was capped 127 times with 1049 points to his credit. This leaves him (beginning of 2018) on #23 on Greece’s all time topscorer list.

Rentzias emerged in senior club-level competition with PAOK in 1992 after signing for a record fee. He helped the club win the European club-level Korac Cup in 1994 and the Greek Cup a year later. In 1997, Rentzias moved to Barcelona, helping his team win the league and cup in 1999. A feat that was repeated two years later and led to a three-year contract renewal for Rentzias in 2001. But he was off to the NBA's 76ers a year later in a three-year, $3 million deal.

Following mild success in his first season, Rentzias was unable to establish himself in the NBA. He moved to Turkish club Ulker, becoming the first Greek player to join a Turkish team. Unable to settle there, he moved to Italy's Siena in 2004 before ending his career in Spain with Valladolid.