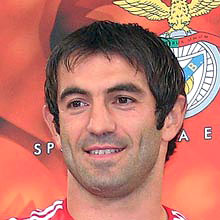 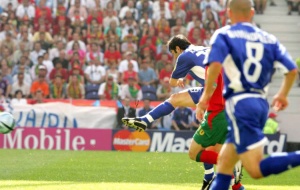 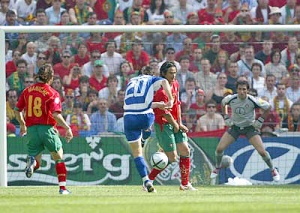 The same (as above) goal from a different angle

Giorgos Karagounis (Greek: Γιώργος Καραγκούνης; born March 6, 1977, in Pyrgos, Greece) is a retired footballer. He has the most caps for Greece.

Karagounis's first professional team was Panathinaikos FC, but he joined Apollon Athens before playing a game with the senior team. After two successful years with Apollon, Karagounis came back to Panathinaikos in 1998. He would be a fixture in the senior team for the next five years. Although Panathinaikos did not win an Alpha Ethniki title during these years, the team was always a contender, and it had good runs in the UEFA Champions League and the UEFA Cup, and Karagounis scored some big goals for the team. In 2003, Karagounis headed to Italy to play for Inter. He did not play much, only getting two starts, but his performance in Euro 2004 might have improved his standing in the team for next year. He scored the first goal of this tournament (Euro 2004) against Portugal, helping Greece to win by 2-1. In 2005, he moved to Portugal to play for SL Benfica based at Estádio da Luz, precisely the same statium where he won the Euro 2004 final for Greece. In July 2007, Karagounis returned to Greece and Panathinaikos. He joined Fulham of the English Premiership in the Summer of 2012 and played there till his retirement in 2014.

Karagounis captained Greece's entry to the 1998 UEFA Under-21 Championship, and the team came very close to winning, losing 1-0 to Spain in the final. After that, Karagounis soon became a regular on the national team. He has earned his 121st cap on October 12, 2012 (breaking the record held by Theodoros Zagorakis) and retired after 139 caps. He has scored 10 goals.

Karagounis was on the Euro 2008 team. During the game against Spain, Giorgios Karagounis received his sixth yellow card at the European Championship (four in 2004 and two in 2008) breaking the record he shared with Hagi, Nedved and Zambrotta.

He captained Greece in WC 2010 in South Africa, leading Greece in their first ever World Cup victory (2-1 over Nigeria).