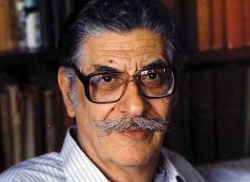 His poems have been translated in many languages and among his most famous works are the three collections "Seasons" and the poems he wrote from 1946 to 1956.

Anagnostakis was born in Thessaloniki on March 10, 1925 and trained as a doctor, specializing in radiology. During the chaotic period of 1944, Anagnostakis served as the Editor-in-Chief of Xekinema (The Start), a student magazine. Anagnostakis' first book of poetry, Epoches (Seasons) was published in 1945, at which point, according to Ramp, the poet's Marxist "dream had already failed him"[1]. His left-wing sympathies had inspired him to join the Resistance, which would lead to his being sentenced to death by a military court during the Civil War. Arrested for his involvement with the Student Movement at the University of Thessaloniki in 1948, Anagnostakis spent several years in Eptapyrgion, a state prison. His second volume, Epoches 2 was published after he was imprisoned in 1948. In the next year, Anagnostakis was both expelled from the Communist Party of Greece and tried in court[2]. He received a death sentence, but outlived the regime. Upon his release in 1951, he published the last book in the cycle.

Anagnostakis began a new cycle of work with his Synecheia (The Continuation), in 1954, and its sequel in 1955. A collection of his works was published the next year. The poet spent 1955 and the next year in Vienna, continuing his medical studies in radiology, before returning to Greece. He spent 1959 through 1961 as editor of Criticism, a journal of literary criticism, and finished his Continuation cycle in 1962. While he did not publish any more major works until 1971's Ta piimata 1941-1971, (The Poems 1941-1971), he continued to contribute to newspapers and magazines.

Although Anagnostakis' 1971 collection represented the end of the published works he was best known for, his existentialism-influenced verse left its mark on a younger generation of Greek poets. This influence is in part owing to his poetry having been set to music by Mikis Theodorakis, as part of his Ballades cycle, written during the seven-year Regime of the Colonels. The Ballades have been performed by vocalist Margarita Zorbala (recorded on her 1975 debut album), amongst others. Anagnostakis moved his practice and family to Athens in 1978.

On June 23, 2005, Anagnostakis was hastily admitted to Amalia Fleming Hospital with heart and respiratory problems and passed away a few hours later. He was 80 years old.