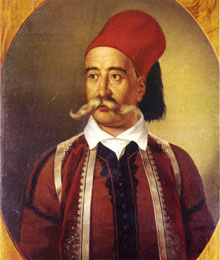 Petros Mavromichalis (1765-1848) (Gk. Πέτρος Μαυρομιχάλης), better known as Petrobey (Πετρόμπεης), was the leader of the Maniot people during the first half of the 19th century.

Mavromichalis' family had a long history of fighting against the Turks (who at that time occupied the rest of Greece). His grandfather Georgakis and his father Pierros were among the leaders of the Orlov Revolt.

The revolt was followed by a period of infighting between the leaders of the Mani; soon, young Petros gained a strong reputation for mediating the disputes and reuniting the warring families. During that period he also made an alliance with Napoleon Bonaparte of France, who was fighting in Egypt; Napoleon was to strike the Ottoman Empire in coordination with a Greek revolt. Napoleon's failure in Egypt doomed that plan.

By 1814 the reorganized Maniots again became a threat to the Turks, and the sultan offered a number of concessions to Mavromichalis, including his being named Bey, or Chieftain, of the Mani - in effect formalizing the de-facto status of autonomy the region had maintained for years. Still, Petrobey continued to organize the Greek capetanei (commanders) of Morea for the revolution that was soon to come. In 1818 he became a member of Filiki Eteria, and in 1819 he brokered a formal pact among the major capetanei families.

On March 17, 1821, Petrobey raised his war flag in Areopolis, effectively signalling the start of the Greek War of Independence. His troops marched into Kalamata, and liberated the city on March 23.

After the summer of 1822, Petrobey retired from battle, leaving the leadership of his troops to his sons (two of whom were killed fighting). He continued to act as a mediator whenever disputes arose among the capetanei, and acted as the leader of the Messinian Senate, a council of prominent revolutionary leaders. He also tried to seek support from the West by sending a number of letters to leaders and philhellenes in Europe and the United States.

After the revolution, Petrobey became a member of the first Greek Senate, under the leadership of Ioannis Kapodistrias. The two men soon clashed as a result of Kapodistrians insistence of establishing a regional administration based on political appointees, replacing the traditional system of family loyalties. Petros' brother Tzanis led a revolt against the appointed governor of Lakonia; the two brothers were invited to meet Kapodistrias and negotiate a solution but, when they showed up, they were arrested. From his prison cell, Petros tried to negotiate a settlement with Kapodistrias; the latter refused. The crisis was then settled by more traditional means: Petros' brother Konstantinos murdered Kapodistrias on September 27th, 1831. Petros publicly disapproved of the murder.

Kapodistrias was followed by King Otto, whose attitude towards the Capetanei was much friendlier. Petros became vice-president of the state council, and later a senator. He died in Athens on January 17, 1848, and was buried with the highest honors.