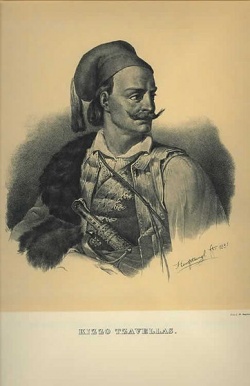 Kitsos Tzavelas was a Greek freedom fighter and Prime Minister.

Tzavelas was born in Souli, Epirus, in 1800, the son of Fotos Tzavelas and grandson of Lambros Tzavelas both of which were famous for their roles in the Souliot struggles against Ali Pasha.

Kitsos played a leading role in the Greek War of Independence in 1821, alongside Georgios Karaiskakis, distinguishing himself especially during the siege of Mesolonghi. After the arrival of Ioannis Kapodistrias, during the latter part of the war, Kitsos was responsible for liberating a large part of Central Greece.

After indepedence, Tzavelas opposed the harsh Bavarian rule of Greece and was imprisoned along with others who had fought in the war. When King Otto reached the age of majority and took over the reigns of government, Tzavelas was released. He was subsequently (1844) appointed Minister of the Military and, in 1847, Prime Minister.