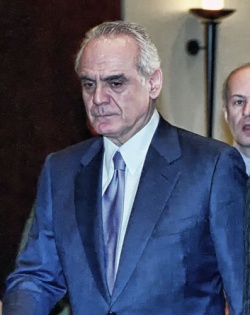 Apostolos-Athanasios 'Akis' Tsochatzopoulos is a Greek politician and central figure in the PASOK party.

Tsochatzopoulos was born in Athens on December 19 of 1939 but spent his formative years in Thessaloniki. He studied civil engineering and economics in Munich and early on became a close political ally of Andreas Papandreou.

In 1968, Tsochatzopoulos became a member of the anti-junta resistance movement PAK. Due to his activities, he was stripped of his Greek citizenship in 1971.

After the restoration of democracy in July 1974, he became a founding member of the PASOK party and was elected to the Hellenic Parliament in the elections of October 1981.

Tsochatzopoulos served in the cabinet of most Papandreou governments except for a brief period when he was Secretary of the Central Committee of PASOK:

Tsochatzopoulos was acting PM during Papandreou's illnesses and twice sought the leadership of PASOK losing to Constantine Simitis.

In June 2010, he came under investigation for possible illegal financial activities after it became known that he and his wife owned expensive properties in the centre of Athens and had extensive links to offshore companies.

On April 11, 2012, he was placed under arrest on money laundering charges.

On April 22, 2013, he was put on trial on separate charges of taking kickbacks and money laundering on arms purchases while he was Minister of Defence.

He was found guilty of all charges on October 7 of that same year.

Tsochatzopoulos is in his second marriage and has two children with his first wife.