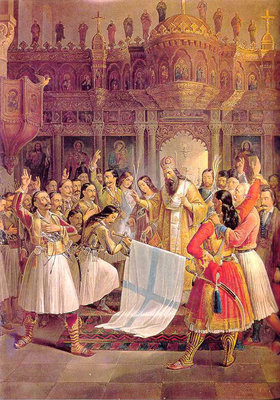 Bishop Germanos of Patra (Greek - Παλαιών Πατρών Γερμανός) was a hero of the Greek Revolution that he, himself blessed and started by proclaiming independence on March 25, 1821 at the Monastery of Agia Lavra.

Like Patriarch Gregory V, he was born in Dimitsana, Arcadia, on March 25, 1771. His name in the world was Georgios Gotzias, the son of jeweller Yiannis Gotzias. He entered the clergy, becoming a deacon and left for theological studies in Smyrna in 1797. He became bishop of Patra in 1806 and a member of the "Friendly Society" (Filiki Eteria), which was seeking independence for the Greek nation from Ottoman yoke, in 1818.

On March 25, 1821, he blessed the fighters at Agia Lavra in Achaea and raised a banner of war. Tradition has it that as he had no flag, he used the curtain of the Holy Place of the church as a banner. The next day he led 500 men to attack the fortifications of Patra.

Germanos left Greece in 1822 for Italy hoping to obtain aid and support for the war effort from the Pope and the Catholic Church but returned in 1824 without having seen him. He was roughed up and robbed by Yiannis Gouras' men the following year, during the infighting that broke out among the Greeks.

Bishop Germanos died in Nafplio on May 30, 1826 after a short illness.

He wrote memoirs of the first two years of the War of Independence that are invaluable to Greek historians.