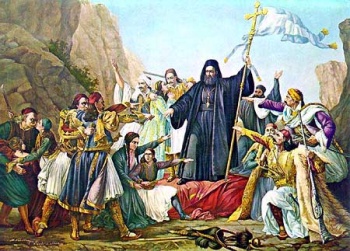 On March 25, 1821 the Bishop Germanos of Patra raised the Greek flag at the Monastery of Agia Lavra in Peloponnesus and one more revolution started against the Turks. The people of Greece shouted "Freedom or Death" and they fought the War of Independence for 9 years (1821-1829) until a small part of modern Greece was finally liberated and it was declared an independent nation.

The seeds of revolution had been planted earlier by the preaching of Kosmas Aitolos and by the writings and poetry of Rigas Feraios. Born in Thessaly and educated in Constantinople, Feraios published a Greek-language newspaper Ephimeris in Vienna in the 1790s. He was deeply influenced by the French Revolution and he published revolutionary tracts, stirring poems and proposed republican constitutions for Greek and pan-Balkan nations. His "Map of Greece" included all lands that Greeks inhabited at the time and had Constantinople as the capital. He was arrested by Austrian officials in Trieste in 1797 when he was betrayed by a Greek merchant in that city. He was handed over to Ottoman officials and was transported to Belgrade with his co-conspirators. They were all strangled to death and their bodies dumped in the Danube River in June, 1798. Instead of diminishing support for Feraios' ideas, his martyrdom fanned the flames of Greek independence.

In 1814, Greek nationalists formed a secret organization called the Friendly Society (Filiki Eteria) in Odessa. With the support of wealthy Greek exile communities in Britain and the United States, the aid of sympathizers in western Europe and covert assistance from Russia, they planned a rebellion. Ioannis Kapodistrias, an official from the Ionian Islands who had become the Russian Foreign Minister, was sought as the leader of the planned revolt, however, after he declined, Alexander Ypsilantis was given the post.

Early in March 1821, Alexander Ypsilantis, accompanied by several other Greek officers, crossed the river Prut in Romania, and with his army of volunteers attempted to stir the flames of revolution in Romania, however, his efforts were unsuccessful. Finally, on the 25th of the month the revolution took root in Greece itself. Simultaneous risings were planned across Greece, including in Macedonia, Crete and Cyprus. With the advantage of surprise, the Greeks succeeded in taking control of the Peloponnese and some other areas.

The Ottomans soon recovered, and retaliated violently, hanging the Ecumenical Patriarch Gregory V and massacring the Greek population of Chios and other towns. The retribution, however, drew sympathy for the Greek cause in western Europe—although the British and French governments suspected that the uprising was a Russian plot to seize Greece and possibly Constantinople from the Ottomans. The Greeks were unable to establish a coherent government in the areas they controlled, and soon fell to fighting among themselves. Inconclusive fighting between Greeks and Ottomans continued until 1825, when the Sultan asked for help from his most powerful vassal, Egypt.

Egypt was then ruled by Mehmet Ali pasha, a Turk who was born in Kavala, who was eager to test his newly modernized armed forces. The Ottoman Sultan also promised Ali concessions in Syria if Egypt participated. The Egyptian force, under the command of Ali's son Ibrahim pasha, was successful and quickly gained dominance of the seas and Aegean islands through the navy. Ibrahim was also succesful in the Peloponnese, where he managed to recapture Tripolis, the administrative center of the area.

In Europe, the Greek revolt aroused widespread sympathy. Greece was viewed as the cradle of western civilization, and it was especially lauded by the spirit of romanticism that was current at the time. The sight of a Christian nation attempting to cast off the rule of a Muslim Empire also appealed to the western European public.

One of those who heard the call was the poet Lord Byron who spent time in Greece, organising funds, supplies and troops, but died from fever at Mesolonghi in 1824. Byron's death did even more to augment European sympathy for the Greek cause. This eventually led the western powers to intervene directly.

In October 1827 the British, Russian and French fleets, on the initiative of local commanders but with the tacit approval of their governments, attacked and destroyed the Ottoman fleet at Navarino (Πύλος). This was the decisive moment in the war of independence, although the British Admiral Sir Edward Codrington ruined his career since he wasn't ordered to achieve such a victory or destroy completely the Turko/Egyptian fleet. In October 1828 the Greeks regrouped and formed a new government under Ioannis Kapodistrias (Καποδíστριας). They then advanced to seize as much territory as possible, including Athens and Thebes, before the western powers impose a ceasefire. The Great Powers, in the London Conference of 1832 determined that the new Greek state would be a monarchy and invited Otto, the second son of the Bavarian King Ludwig I of Bavaria to be King of Greece, thus, Greece was finally recognised as a sovereign state. This state of affairs and an agreed border was formally recognized by the Turks and the European powers with the signing of the Treaty of Constantinople in July 1832.

The struggle for the liberation of all the lands inhabited by Greeks continued: In 1864, the Ionian islands were added to Greece; in 1881 parts of Epirus and Thessaly. Crete, the islands of the Eastern Aegean and Macedonia were added in 1913 and Western Thrace in 1919. After World War II the Dodecanese islands were also returned to Greece.