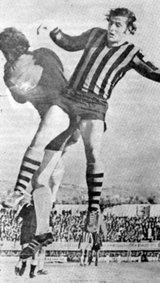 Kostas Davourlis - one of the all time best

Considered by many to be one of the best all-time Greek football players, Kostas Davourlis (nicknamed "the black prince") was born on January 4, 1948 in a poor section of Patra.

He played 11 years in the Greek first division league (95 goals in 325 games) and 6 years in Second Division.

Davourlis played for local club Panionios Patra, Panachaiki, Olympiakos and Korinthos FC. At his retirement he held the Greek record for most goals directly from a freekick: 22. During his career he was capped 11 times (2 goals) by the National Football Team of Greece.

Davourlis died of heart attack on May 23, 1992. Panachaiki renamed their stadium in his honour.