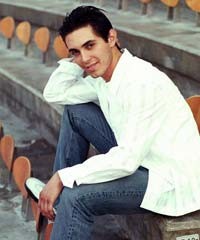 Cypriot Mihalis Hadjiyiannis was born on the November 5, 1978, in Nicosia Cyprus. His family are refugees, originally from Kyrenia, a town which now is under Turkish occupation.

He started his music career in 1994 at the age of 16, when he won the first price at a `young talents`` show. In 1995 he gave his first concert and released his first CD single called "Gramma" ("Letter").

In May 1998 he represented Cyprus in the Eurovision Song Contest singing his own composition, "Genesis". Afterwards he worked with composer Giorgos Hadjinasios and in December 1998 he had his first LP released, becoming a star in Greece.

In March of 2000, Hadjiyiannis released his first solo album, “Paraxeni Giorti” (Strange Celebration). Other composers and lyricists contributed to the making of this album, which was to produce some of the biggest hits of that year. The song “Mono Sta Oneira” (Only in Dreams) stayed at number one in the Greek radio airplay for several weeks. And two other songs from the album, “Paraxeni Giorti” and “Kai tha Hatho” (I’ll disappear), had similar successes. The album went double-platinum and was a career landmark for the young singer-songwriter in the Greek music scene. In November of the same year, he started to perform live shows in Athens.

Early in 2001, he released the CD single 'Den Eho Hrono' ('I Have No Time'). It soon reached the top of the charts and went platinum. Later that year, he appeared live with the great Greek singer Haris Alexiou to great reviews. That summer, he toured Greece for the first time.

In the spring of 2002 he released his second solo album “Kryfo Fili” (Secret Kiss), which has since gone triple-platinum. This album contains a series of big hits such as “Eisai Edo” (You Are Here) “To S’ Agapo” (I Love You), “Horis Anapnoi” (Breathless), “I Ekdromi” (Excursion), “Kapnos” (Smoke) and others. This album established him as one of the most successful singer-songwriters and promising performers in the Greek music scene. In the summer of 2002 he toured Greece again with even greater success. And in winter he shared the same stage with another Greek icon, singer Dimitra Galani.

In 2003 he released 'Monos Mou' (All Alone), an E.P. containing five songs, which went triple platinum. One of the songs, 'An Mou Tilephonouses' (If You Called) became a hit and the demand for strong airplay kept growing for months. And it still remains one of the most popular ballads in Greece. In the summer of 2003 he toured Greece with 63 sold out shows.

He received three awards in the official Greek music awards in 2003 and four in 2004, including the award for the best male performer of the year.

In April 2004 , he released his third solo record, 'Akatalili Skini', which increased his popularity in the Greek music scene. On April 30, 2004, he represented Cyprus at the official enlargement ceremony which took place in Warsaw, to mark the accession of ten new countries into the European Union.

In the summer of 2004 he toured Greece and sang at the closing ceremony of the Olympic Games in Athens. In winter he made about 100 appearances in Athens and Salonika with the hugely popular singer, Paschalis Terzis.

In the summer of 2005 he toured Greece once again ending in September at Lycabettus Theatre, Mount Lycabettus, Athens with two sold out, recorded, concerts. In October he travelled to Australia for the first time and performed three concerts. In November he started performning with Antonis Remos, in Athens until April 2006.

In March 2006 he released his first live album taken from the recorded concerts in Lycabettus with three new songs, 'De fevgo','Den ime edo gia kanena' and 'Miazoume' all becoming hits. The live album also contained a DVD with photographs of scenes from the concerts and backstage.

Later in April, he toured Canada and the USA with Giorgos Dalaras. And in May he went to Salonika where he appeared with Natasa Theodoridou. In summer he toured Greece performing 50 sold out concerts. In August he released a single, 'Ola i tipota' (All or nothing).

In December 2006 he released his fourth studio album, 'Filoi kai echthroi' (Friends and Enemies) with some songs becoming big hits - 'Na eise ekei', 'Esthimata', 'Heria psila' and others. On December 15, 2006 he began performing in Vox in Athens.

In March 2007 he collaborated with German Rock band, Reamonn and released the hit 'Tonight' with greek lyrics by Eleana Vrahali. The song is included in the re-release of 'Wish' by Reamonn and 'Filoi ke echthroi' of Michalis Hadjiyiannis.