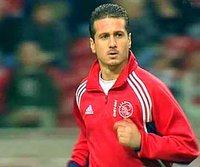 Nikos Machlas while with Ajax.

Machlas was born June 16, 1973 in Heraklion, Crete. He started his football career with local club OFI FC in 1991. Following the 1996 season, he moved on to Vitesse Arnhem and the Dutch League, the so-called Eredivisie.

In the 1997-1998 football season he was Europe's top scorer with 34 goals while playing for Vitesse Arnhem. It earned him the European Golden Shoe for 1997–98.

Following the 1998-99 season Vitesse president Karel Aalbers wanted to sell Machlas to a foreign top club but Machlas really wanted to go to Ajax. "Ajax is for me the perfect team", said Machlas in an interview to soccer magazine Sportweek. The European topscorer signed a new contract with Ajax beginning of July 1999. The transfer sum was about US$ 12 million. He was the first Greek to ever play for Ajax. Machlas had chosen Ajax while other top clubs like Fiorentina and Arsenal, expressed interest in signing him.

Machlas returned to Greece in 2003 to play for Iraklis Thessaloniki. In 2004 he returned to his home team OFI Heraklion and in 2006, he signed for APOEL Nicosia.

Machlas was capped 61 times for the Greek National Team, scoring 18 goals (placing him on 5th place of all-time scorers for the national team).

His career ended having played a total of 462 games and 196 goals scored.