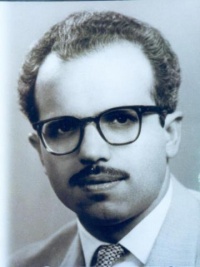 Polycarpos Georkadjis (Greek Πολύκαρπος Γεωρκάτζης) was a member of EOKA (nom-de-guerre "Laertes"), who became minister of interior affairs of the Republic of Cyprus despite having no higher education.

He joined the EOKA movement which sought to bring about Enosis - union with Greece - in the 1950s and earned the nickname "Houdini" for his ability to escape when imprisoned by the British.

After Cyprus became independent in 1960, Georkadjis became minister of interior affairs. He founded and headed the intelligence agency of Cyprus. He was notorious for using the police as his personal army and for writing the Akritas plan (plan of action in case of clashes between the two communities in Cyprus).

After it emerged that he had offered assistance (hospitality and training) to Alekos Panagoulis, a Greek activist who attempted to kill dictator George Papadopoulos, Georkadjis was forced to resign. He was suspected as having had a part in an attempt to assassinate Archbishop Makarios III on March 8, 1970 and was himself murdered 8 days later, on March 16, 1970, by automatic gun fire, while driving his car between Lefkosia and Ammochostos.