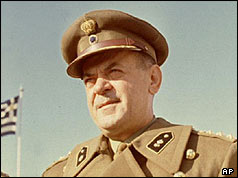 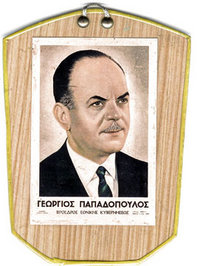 Papadopoulos was born in Elaiochori, Achaea prefecture to teacher Christos and his wife Chrysoula. He had two brothers, Constantine and Charalambos. He received Secondary education and then enlisted in the Hellenic Army Academy during 1937. He completed his three-year education in 1940.

Graduates of the 1940 class would soon be introduced to war. On October 28, 1940, Prime Minister of Greece Ioannis Metaxas refused to allow the Italian army to cross the borders between Greece and Albania. Prime Minister of Italy Benito Mussolini had already issued orders for an invasion in that event. Thus Greece entered World War II. George saw field action as a Second Lieutenant of the Artillery against both the Italians and the forces of Nazi Germany who joined them on April 6, 1941.

The German army captured Athens on April 27, 1941. Following their victory in the Battle of Crete (May 20 - June 1, 1941), Greece was placed under the combined occupation of Nazi Germany, the Kingdom of Italy and Bulgaria. A resistance movement soon emerged, including several organizations varying in ideological conviction, popular support and area of activity. Papadopoulos took part in the resistance as a member of a right-wing group. During those years, he met with Georgios Grivas who would later organise the EOKA movement in Cyprus.

After liberation, Papadopoulos - now a captain in the national army - fought in the Greek Civil War.

Papadopoulos was a member of the martial court that sentenced communist Nikos Beloyiannis to death, in a parody trial in 1951. He was in the minority that did not approve the death sentence.

A career army officer since 1940, he served at KYP (Kentriki Ypiresia Pliroforion - the former Greek intelligence agency) from 1959 to 1964, and became a colonel in 1967. 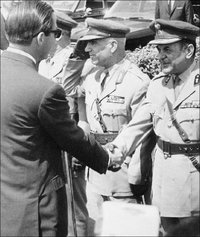 Shaking the hand of the King

The same year, on April 21, Papadopoulos led a successful coup with fellow officers (most notable among them Stylianos Pattakos and Nikolaos Makarezos), taking advantage of the volatile political situation that had arisen from a conflict between King Constantine II and the aging prime minister, Georgios Papandreou. Many observers characterize his subsequent rule, known as Junta, as heavy-handed. Henry Tasca, American Ambassador to Greece, called the new regime "the most anti-communist group you'll find anywhere." Almost anyone who even said the word "communist" was jailed.

His regime was supported by the United States and he is believed to have personal connections with the American Central Intelligence Agency. Internal CIA documents allegedly refer to Papadopoulos as an ally.

He was overthrown on November 25, 1973 by members of his own administration, after the student uprising of November 17 at the National Technical University of Athens. He managed to put down the uprising only with the help of the army. The head of the feared military police, Brigadier Dimitrios Ioannides then replaced him as the head of the dictatorship. (From BBC: Army deposes 'hated' Greek president)

After the restoration of democracy in 1974, Papadopoulos was tried along with his colleagues for treason and insurrection and received the death penalty, which was later converted to a life sentence.

A decision by the government to free him on humanitarian grounds in December 1990 was dropped after a public outcry. He spent the last three years of his sentence in a prison hospital, suffering from cancer, before dying on June 27, 1999 at the age of 80.

Today, Papadopoulos is a symbol of authoritarianism for the vast majority of Greeks, some of whom characterize him one of the most despised persons in recent Greek history. After the restoration of democracy, there was still some support for the politics of Papadopoulos, represented by a political party (ΕΠΕΝ - EPEN). Today, EPEN has dissolved, and most of its former members have migrated to the extreme-right Popular Orthodox Rally.