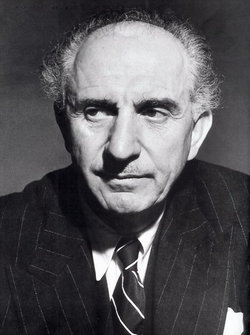 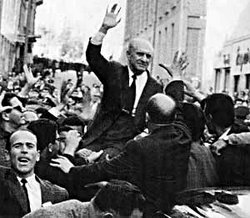 Cheered by the crowds during party gathering

Georgios Papandreou (in Greek Γεώργιος Παπανδρέου) (13 February 1888 - 1 November 1968) was a Greek politician. He was born at Kalentzi, in Achaea prefecture in southern Greece. As a young man, he became involved in politics as a supporter of the Liberal Party leader Eleftherios Venizelos, who made him Governor of Lesbos after the First Balkan War of 1912. He married a Polish woman, Sofia Minejko, and their son Andreas Papandreou was born at Chios in 1919. Later in life, he would marry actress Cybele Adrianou.

During the political crisis surrounding Greece's entry into World War I, Papandreou was one of Venizelos's closest supporters against the pro-German King Constantine I. When Venizelos was forced to flee Athens, Papandreou accompanied him to Crete, and then went to Lesbos, where he mobilised anti-monarchist supporters in the islands and rallied support for Venizelos' insurgent pro-British government in Thessaloniki. In 1921 he narrowly escaped assassination.

Papandreou served as a Venizelist Member of Parliament, as Interior Minister in 1923, and in several other government posts during the Republic of 1924–1935. A lifelong opponent of the Greek monarchy, he was exiled in 1936 by the Greek royalist dictator Ioannis Metaxas. Following the German occupation of Greece in World War II, he joined the predominately Venizelist government-in-exile based in Egypt (with British support, and King George II as official head of state), and in 1944-45 he served as Prime Minister. During the later 1940s he saw the Greek Communist Party as the main threat to democracy and served in a number of cabinets between 1946 and 1952 while the Greek Civil War was raging.

Papandreou spent the rest of the 1950s in opposition, while the conservatives were in the ascendant and the left was repressed by the royalist controlled armed forces. In 1961 Papandreou revived Greek liberalism by founding the Center Union Party, a confederation of old liberal Venizelists and dissatisfied conservatives. Papandreou's party narrowly won the elections of November 1963. In the repeat elections of February 1964, the Centre Union secured 52.7% of the vote and formed a majority government. His progressive policies as premier aroused much opposition in conservative circles, as did the prominent role played by his son Andreas, whose policies were seen as being considerably left of center.

He was against the Zurich agreement which led to the foundation of the republic of Cyprus. Following clashes between the two communities in Cyprus, his government sent a Greek army division to Cyprus in 1964.

Constantine II openly opposed Papandreou's government and there were frequent ultra-rightist plots in the Army which destabilised the government. Finally the King engineered a split in the Centre Union and in July 1965 he dismissed the government following a dispute over control of the Ministry of Defence. After the April 1967 military coup by the Colonels' junta led by George Papadopoulos, Papandreou was arrested. He died under house arrest in November 1968. His funeral became the occasion for a large anti-government demonstration.