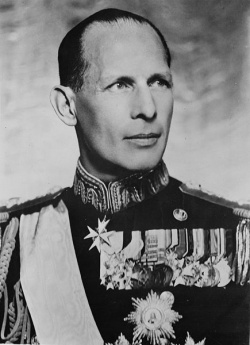 He succeeded to the Greek throne on his father's abdication, September 27, 1922. In late 1923 he was asked by the government to leave Greece "on leave" while the National Assembly considered the question of the future form of government. He complied and left for an exile to Romania, later living in Great Britain. He was officially deposed when a republic was proclaimed on March 25, 1924. He was restored to the throne, November 3 1935, but again left Greece following the German invasion, April 23, 1941. This time he went into exile to Great Britain. He was recalled to the throne September 28, 1946.

George II died of a sudden heart attack in the Royal Palace in Athens on April 1, 1947.